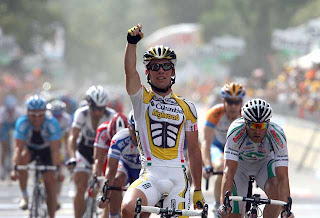 Team Columbia has confirmed that Mark Cavendish will not continue in the Giro d'Italia when the race heads into the Apennine mountains on Saturday's 14th stage.

After winning his third stage in Florence on Friday, Cavendish said he would talk to the Team Columbia management and decide together whether to continue.

Just after eight o'clock, the team issued a statement confirming that Cavendish would not continue in the Giro.

“He has had a very successful couple of weeks at the Giro but he is still young and he has a long career ahead of him,” commented Team Manager Rolf Aldag.

“He has already raced 55 days this year and it is our view that the best thing for Mark is to take some recovery now before the Tour.”

In the absence of Cavendish, Team Columbia will focus on overall success with Michael Rogers and Thomas Lovkvist, while Edvald Boasson Hagen is expected to take over sprinting duties in the final stages of the Giro.

Tour de France in Cavendish's sights
During the post-race press scrum, Mark Cavendish was pressed about if he will continue in the Giro after his third win.

He has huge respect for the Giro and suffered to finish last year but he and Team Columbia know there are plenty of reasons for not continuing in this year's Giro. The next four stages are all in the Apennines mountains and the only remaining stage for the sprinters is in Benevento next Thursday. Hanging on in the hope of winning there would do far more damage than good to his winning speed.

It is highly likely that Cavendish will pull out of the Giro, take a short break and then begin building up for the Tour De France by riding the Tour of Switzerland in June.

“I'd like to carry but I'm going to sit down with team and decide what to do,” he said in the after race press conference.

“There could be a sprint near the end of the Giro but I don't think it's likely that I'll be there because it's better for riders who are all-rounds. I want to carry on as long as possible but I've got other objectives for myself and the team. We'll sit down, talk and discuss the situation.”

Because he may pull out of this year's Giro, Cavendish was asked if he had now become less emotive about his cycling and more of a professional. He responded that he is a total professional because he loves cycling so much.

“I think the reason I'm so professional in what I do is that I love the sport and everything about it. I love to race,” he said.

“It pains a rider not to go the start. I'm not the only rider suffering; there are 200 riders who are tired. Sometimes pride can take over logic but I've got to look at both sides and considered my options. Nobody wants to stop but I was 24 only yesterday and I want to have a long career, so we have to see what happens about the rest of the race. The Tour de France is in five, six weeks time. I'll be going there to hopefully put on a good show.”

A good show means more sprint victories and a determined attempt to win the green points jersey. Cavendish has achieved the goal he set himself for this Giro. Now it is time to get ready for the next big goal.
Posted by Recovox at 11:49 AM