Astana team set to survive past May 31 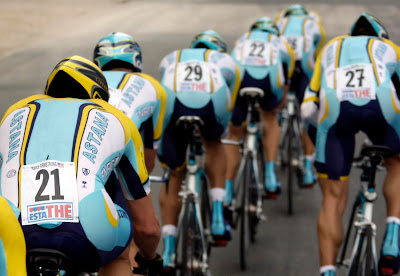 It looks more and more likely that the Astana team will survive after the Giro d'Italia after the team's Kazakhstan sponsors paid a large part of their debts. However UCI President Pat McQuaid has refused to guarantee that the team can ride the Tour de France.

McQuaid has been working hard behind the scenes to resolve the team's problems and told Cycling Weekly that the bank guarantee has been repaid and other debts have been paid.

“The deadline we've given them is a bank guarantee deadline and the payments are up to schedule. They've paid sums of money in recent weeks, and they may be in order. The bank guarantees I believe have been put back in place," McQuaid said before the stage 19 of the Giro d'Italia to Mount Vesuvius.

It seems that riders and staff have received some of their wages but McQuaid seems to be trying to pin down sponsorship payments from the Kazakhstan sponsors for the rest of 2009.

“We've also asked the Kazakhs for other guarantees about the team for the rest of the year, and when we get responses about that we will decide whether or not to go to the license commission for the withdrawal of the license,” McQuaid said.

“There's still no guarantees that the team will ride the Tour de France. The license commission meets in mid-July and that's when any decision will be made." 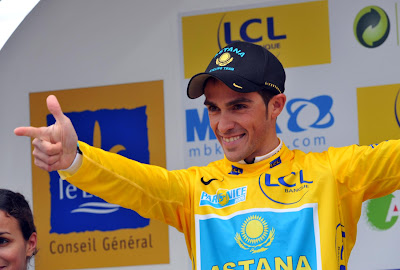 Johan Bruyneel has refused to give details of negotiations with Astana in recent days or reveal if he and Lance Armstrong have secured a new sponsor for the team.

There has been a lot of speculation that Spain's Alberto Contador would use the team's financial problems to jump ship and perhaps join the Caisse d'Epargne team for the Tour de France.

However, Bruyneel today dropped a strong hint that Astana will remain as the title sponsor and that 2007 Tour de France winner Alberto Contador will stay with the team.

“I've spoken with Alberto at length on the phone yesterday and there's not a single thought in his mind (about leaving),” Bruyneel said.

“He's going to be with our team. We don't know yet what it's going to be called yet but hopefully it's Astana.”
Posted by Recovox at 3:49 PM