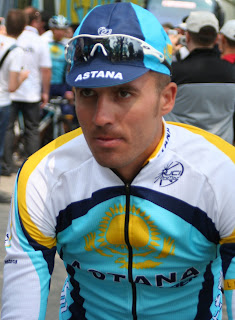 By Gregor Brown in Florence, Italy

Yaroslav Popovych is prepared to defend his team captain Levi Leipheimer in the second half of the Giro d'Italia, where Leipheimer currently sits in third overall, despite the Astana team's money problems.

A win in the Italian three-week stage race could help the team secure additional funds to continue its season. The riders and staff are awaiting the payment of two months of salary from their Kazakh backers.

"With Lance [Armstrong] and [Johan] Bruyneel we are more secure. If I was in another team, with another manger then I would be afraid," Popovych said.

Popovych added that he is not searching for other teams despite missing salary payments. He prefers to focus on the team's objective: helping Leipheimer make up the 40-second disadvantage on race leader Denis Menchov (and six seconds from Danilo Di Luca, in second overall).

"I am not afraid to work, this is not the problem. As long as I am good health I will be up there."

One problem is the loss of important mountain helper Chris Horner ahead of three difficult mountaintop finishes. Horner returned home to Oregon following a crash in stage 10 and a subsequent muscle strain in his left calf.

Popovych is familiar with delivering a leader to the overall win. He helped teammates Armstrong and Alberto Contador win the 2005 and 2007 Tours de France, respectively.
Posted by Recovox at 8:53 PM