Menchov Overcomes Disaster To Save His Giro 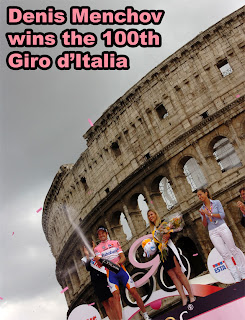 Rabobank's Denis Menchov saved his Giro d'Italia victory from near ruin following a last-kilometre crash in the final time trial in Rome. The Russian was on track for the best time, but slipped out on the rain-soaked cobbles and slid down the road.

After jumping up, getting a perfect bike change from his mechanic, he waged an adrenaline-fueled dash to the line to save the day. Menchov finished 10th on the day and 21 seconds faster than second overall Danilo Di Luca.

The stage was won by the Lithuanian time trial champion, Ignatas Konovalovas (Cervelo TestTeam), who was one of the last riders to enjoy a dry course. The 23-year-old slipped in one second faster than Garmin-Slipstream's Bradley Wiggins, who encountered the rain on the last half of his race.

The day in glorious Roma dawned with anticipation in the air - the first riders looking forward to polishing off the fastest Giro d'Italia in history while the later riders looked at the skies in concern, hoping the rain would hold off.

The rain made conditions difficult for Garmin-Slipstream's Bradley Wiggins, who was fastest at the early checks. The Olympic champion encountered not only slippery rain-dampened turns but also a stopped Bouygues Telecom car, which was attending to Matthieu Sprick, in the approach to the line.

None of the riders who encountered the wet roads could crack the top ten, and indeed it wasn't until the showers let up and the steady breeze dried most of the course that Marco Pinotti (Columbia-Highroad) could slip in for seventh fastest.

Konovalovas' time remained unchallenged as the top riders on the general classification took to the course. One by one, the top names tried but failed to reach the Lithuanian's time. Marzio Bruseghin (Lampre), a time trial specialist, fell 16 seconds shy.

Levi Leipheimer (Astana) was not taking any risks as the rain began anew, and finished well off the pace.

Di Luca, on the other hand, rode the time trial as if his life depended on it. Hurtling through the bends and hammering over the cobbles, the Italian threw caution to the wind and led at the first time check by one second. Overall leader Menchov was five seconds behind after just 4.4km.

Di Luca's gamble failed to pay off, however, and he faded significantly by the second check, falling 14 seconds behind Menchov.

His victory seemingly sewn up, Menchov headed into the final kilometre on track for the fastest time, but on the rain-sodden cobbles, disaster struck and he crashed. A quick bike change saved the day, however, and the Russian was able to get to the line just in time to save his Giro. He finished 10th overall, even extending his lead over Di Luca to 41 seconds in the process.

The normally stony-faced Russian let out a rare display of emotion as he crossed the line, dropped his bike and pumped both fists in the air and roared with joy.