Petacchi blows into Trieste for win 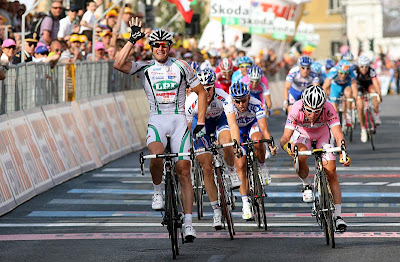 "I was thinking for the last two days how to battle him [Cavendish]. I have never done a sprint like this, head to head," said Petacchi. "He is a great rival, always correct. This goes to my wife and my baby, Alessandro."

Cavendish continues to rule the race overall and holds the leader's maglia rosa. His team won the team time trial in Venice yesterday.

"I let my team down. They delivered my perfectly, but I left it too late to make the sprint easier for myself, but Alessandro got the jump on me – you can't beat him when he gets the jump," said Cavendish.

Leonardo Scarselli (ISD) marked the early portions of the stage with a solo escape. The Italian attacked at kilometre nine, but the peloton caught him after nearly 125 kilometres.