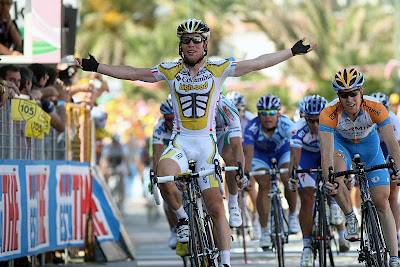 The general classification favorites enjoyed a relatively quiet stage one day prior to the 60.6-kilometre time trial show-down on the Cinque Terre tomorrow. Several breakaway attempts were made during the stage, including a solo effort by Vladimir Isaichev (Xacobeo Galicia) which reached an 8:00 advantage before the Russian was absorbed with approximately 40 kilometres remaining.

Team Astana ramped up the pace on the ascent of the Passo del Turchino, the final categorized climb at 20 kilometres to go, as Lance Armstrong and Levi Leipheimer controlled the pace on the climb and descent, stringing out the field in the process.

The teams of the sprinters, however, returned to the head of the peloton for the flat, concluding 10 kilometres to the finish setting up a bunch sprint for the Giro d'Italia's fast men.