Voigt on the road to recovery after Tour crash 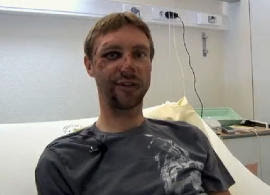 Jens Voigt has issued a video message to his fans thanking them for all of their support and good wishes after his crash on stage 16 of this year's Tour de France.

The video was recorded in the hospital where Jens is recovering from the injuries he sustained after losing control of his bike on the descent of Col du Petit Saint Bernard in the final week of the Tour. The extent of Voigt's injuries can be clearly seen in the clip.

"Hello, it's me," Voigt says in the video. "It's Jens, and I'm still alive... to the surprise of some people." "Thanks for the support you gave me, thanks for the millions of letters. I'm doing better than expected. And I will be back riding soon."

Millions of television viewers witnessed the crash on live television. The German Saxo Bank rider lay unconscious on the road after the incident and was taken to Grenoble hospital where it was discovered that he had fractured his cheekbone as well as suffering from severe cuts and concussion.

Voigt expressed his regrets at missing the Tour of Denmark (July 29-August 2), but hinted that if his recovery goes well he may ride in the Tour of Ireland on August 21-23, 2009.

Click on the title link to watch the video.
Posted by Recovox at 10:12 AM