His Weight in Check, Lance Climbs With The Leaders 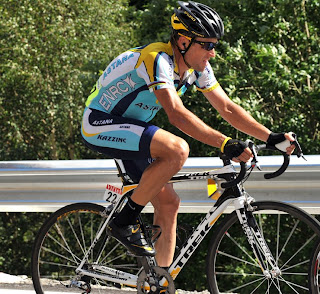 Twelve months ago, when Lance Armstrong first started talking about he returning to professional cycling – and particularly the Tour de France – climbing power wasn't my biggest concern. It was Lance's weight that had me worried. And when I first looked at the parcours of the 2009 Tour de France it was Stage 7 that I considered the “day of reckoning”. It's not that I thought today's stage would be the decisive stage that could win the Tour for anyone, but I knew that in order for Lance to be in the group with the main yellow jersey contenders today, he had to lose some serious weight.

The biggest problem with the weight Lance had on his frame in July 2008 was that a lot of it was upper body muscle. He was lean – not as lean as he is now, but pretty damn lean for a retired then 36-year-old father of three. But he had something like 7 kilograms to lose in order to get down to his Tour de France weight, and only 2-3 of those were fat. That left about 4-5 kilos of muscle that had to be systematically stripped off his body in the span of 12 months.

The last time Lance lost that kind of muscle mass in that short a period of time, it took cancer and chemotherapy to do the job. Don't get me wrong, I'm in no way saying Lance was fortunate to have cancer, and I wouldn't wish what he went through on my worst enemy. But the fact of the matter is, the only other time in his life when he dropped muscle mass as significantly as he needed to over the past 12 months was during his battle with cancer.

That presented a huge challenge for me and everyone else involved with Lance's comeback. Stripping muscle off an athlete is not easy, especially when that athlete is Lance Armstrong. Like many other elite athletes, he naturally has the ability to pack on muscle mass quickly. It's part of the same set of genetic gifts that give him the ability to recover from hard workouts quickly. So, during his retirement, he put on upper body muscle as the result of strength training. To get that muscle back off his chest, shoulders, and arms, he was going to have to put in a lot of time on the bike.

There's no magic potion that allows an athlete to work out and lose muscle at the same time. We couldn't just starve it off, because Lance needed to provide his body with adequate nutrition to support the training that was rebuilding his aerobic engine. What we could do, however, was leverage the high training volume that was going to be required to build his endurance to create a consistent caloric deficit over a period of weeks and months. It was a balancing act that carried with it significant risks. In the past, Lance had managed his caloric intake for relatively short periods of time in order to lose a few kilos here or there, but losing kilos of muscle meant having to restrict his caloric intake over a much longer period of time. That requires serious commitment on the part of any athlete, and though I've never doubted Lance's level of commitment, time was not on his side.

Having been a professional athlete for more than half of his life, Lance did not have to resort to weighing his food. We did that earlier in his career, but personally I like to get athletes away from that process if at all possible. I'd rather they learn – as Lance did – how to manage their portions by feel and sight so they can live a more normal lifestyle while still managing their caloric intake.

I've been waiting for Stage 7 of the 2009 Tour de France for a long time, and I was very happy with what I saw today. Lance looked comfortable in the group of yellow jersey contenders, even after his Astana teammate Alberto Contador attacked and both Cadel Evans and Andy Schleck picked up the pace to chase after him. Months ago, I remember thinking that if Lance was still a kilo or two too heavy when he reached Stage 7, he'd probably lose a minute to the yellow jersey contenders. Today, I didn't see anyone who looked capable of taking that much time out of him – not even Contador if you take the team dynamics out of the picture.

At this point, I'm relieved, and hopeful. I'm relieved that Lance's efforts to return to his Tour de France weight were effective and didn't prevent him from simultaneously rebuilding his endurance and sustainable power output. And I'm hopeful because his performance today showed that he has the power to be a strong asset for the Astana team. Having Lance in the lead group on a major climb gives Astana more cards to play and puts riders like Cadel Evans, Carlos Sastre, Andy Schleck, and Christian Vande Velde at a greater disadvantage.
Posted by Recovox at 4:19 PM