Armstrong to race for Team RadioShack in 2010 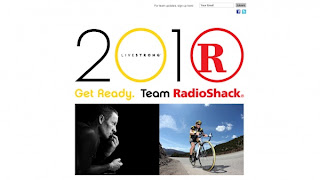 Lance Armstrong’s new team will be Team RadioShack for the 2010 season and beyond.

RadioShack Corporation will form an American ProTour team, and, beginning next year, Lance Armstrong will compete for Team RadioShack "as a cyclist, runner and triathlete," the company announced in a press release.

Armstrong will continue to promote his LiveStrong Foundation with RadioShack.

“Utilizing the massive media attention that the sport receives has been the perfect vehicle to help spread the LiveStrong message around the world,” Armstrong said in a press release. “To be able to compete for an American team comprised of the world’s top cyclists, supported by the best coaches and staff – I couldn’t be happier to partner with RadioShack, a truly iconic American brand."

No other riders were announced to the roster.

Armstrong confirmed to reporters earlier this week that he will race in 2010 and promises to return to the Tour de France. He also said he will race the 2010 Amgen Tour of California in May instead of the Giro d'Italia.

“RadioShack keeps people connected in a highly mobile world through innovative technology from leading brands,” said Lee Applbaum, RadioShack’s chief marketing officer, in a press release. “As one of the greatest athletes of our generation, a father, a cancer survivor, and a tireless advocate in the fight against cancer, Lance Armstrong understands the power of keeping people connected and that’s why we feel he’s the perfect partner for our brand."

The team will be managed by Capital Sports & Entertainment (CSE), the same group that managed the Discovery Channel Pro Cycling Team and currently runs the Trek-LiveStrong U23 Team. Based in Austin, Texas, CSE was also behind the music festivals Austin City Limits and Lollapalooza.

On Thursday, Tour race leader Alberto Contador did not want to comment when asked about whether he will race with Armstrong’s new team.

“I am concentrated 100 percent on the Tour right now. There are three days left to win,” Contador said. “After we get to Paris, we will have time to consider the future.”
Posted by Recovox at 10:23 AM