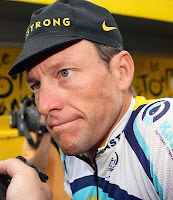 With just a few seconds separating the top six riders in the Tour de France overall standings, the riders who are chasing leader Rinaldo Nocentini (AG2R) and the Astana duo of Alberto Contador and Lance Armstrong are seeking any opportunity to make up time. The race heads back into the high mountains tomorrow, but Armstrong isn't expecting Friday's 13th stage to make a big difference.

Instead, Armstrong said, he is looking three days down the road to the 207.5 kilometre stage to Verbier and its mountaintop finish to be the decisive day. The seven-time Tour de France winner is eight seconds away from the leader's yellow jersey after 12 days of racing.

"Tomorrow is hard, it is a real stage. The Platzerwasel climb is difficult, even if it is a long way from the finish. But I don't think we will see a change until Verbier," Armstrong said Thursday morning.

Armstrong is third overall behind leader Rinaldo Nocentini and 2007 winner, Astana teammate Alberto Contador. Astana has two other men in the overall: Levi Leipheimer (at 39") and Andreas Klöden (at 54"). He leads rivals like 2008 winner Carlos Sastre by nearly three minutes and Giro d'Italia champion Denis Menchov by almost five.

"Some might think that the race is finished for Menchov, but you have to keep an eye on him. If he gains some time in the Alps he could present a problem on Mont Ventoux. I would put Carlos Sastre, the Schleck brothers [Fränk and Andy] and Cadel Evans in one category, clearly they are the most dangerous rivals. The others are just behind."

Friday's stage travels through France's Vosges and Haut-Rhin departments, a region which hosted one of the lower moments in Armstrong's Tour career. In 2005, he was in the yellow jersey when he came under attack on the final climb of stage nine to Gérardmer and had no team support to help control the race.

"It was when T-Mobile was so strong and I was isolated, it was a bad day for our team. I generally know the area, but not the specific climbs."

Armstrong survived the day without losing time and went on to win his seventh consecutive Tour de France that year. He retired immediately afterwards, but made his comeback to the race this year.
Posted by Recovox at 8:24 PM