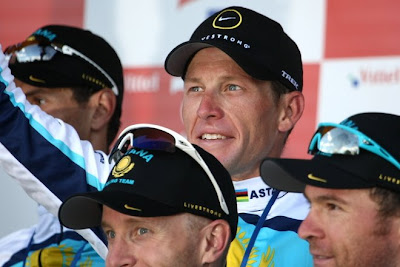 Lance Armstrong dramatically missed out on the yellow jersey by the slimmest of margins today after his Astana team smashed their rivals apart in the Tour de France's fourth stage time trial.

Astana came over the finish line of the 39km race against the clock 40sec ahead of the Saxo Bank team of Fabian Cancellara, who began and finished the race in the yellow jersey.

However Armstrong, the seven-time champion who moved up seven places from 10th to third after Monday's equally dramatic third stage, has shown once again that he fully intends to stay in contention for an eighth Tour crown.

Media interest in Armstrong has intensified in the past 48 hours, with police moving around the Astana bus in the race's aftermath to break up the scrum of waiting journalists.

"It makes me miss a bit the beach I was on for the last four years before all this," quipped Armstrong as he approached the massed ranks of the press.

"It's a little bit of a disappointment (to miss) but the yellow jersey is on the horizon. Astana did their maximum."

Returning to the race four years after his record seventh triumph in 2005, the Texan is now second in the overall standings at 0sec behind Cancellara, missing taking the yellow jersey by two-tenths of a second.

Ahead of three key mountain stages in the Pyrenees, beginning on Friday, Armstrong and his team are in the driving seat. Cancellara is not a real contender for the yellow jersey so Armstrong, at this point, will be seen by some as the virtual race leader.

Adding some intrigue to the race is the fact that Astana's official team leader Alberto Contador, the 2007 champion, is now third overall at 19sec adrift while another two Astana riders, Andreas Kloden and Levi Leipheimer, are not far behind.

Defending Tour champion Carlos Sastre suffered his second big setback on the race, after losing time to key rivals in the opening stage time trial, when his Cervelo team finished eighth at 1:37 behind Astana.

Cadel Evans' hopes of heading into the Pyreneean stages of the Tour de France on a high took a knock when his Silence-Lotto team performed disastrously on the team time trial, finishing 2:36 off the pace.