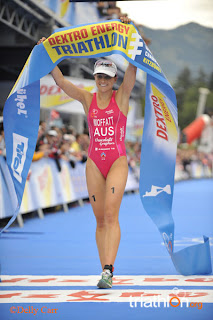 Emma Moffatt from Australia stopped the clock in 1:54:37 at the Kitzbühel Dextro Energy Triathlon – ITU World Championship Series race to register her third straight victory following wins at the Washington, DC leg of the series and the Hy-Vee ITU Triathlon Elite Cup in Des Moines, Iowa, where she pocketed $200,000. Moffatt’s win reinforces her lead at the top of the Dextro Energy Triathlon - ITU World Championship Rankings.

The Beijing Olympic bronze medallist never looked troubled as she broke away at the half way point on the run to win by 34 seconds ahead of newly crowned European champion, Nicola Spirig from Switzerland. New Zealand’s Andrea Hewitt took third to back up her win at the Madrid Dextro Energy Triathlon – ITU World Championship in May.

The race started with a bang as Hayley Piersol from the USA laid down an awesome 1500m swim to exit the lake over a minute ahead of the next athlete. Her brother, Aaron, is a five time Olympic gold medallist in the pool and recently set two world records at the United States national championships.

Her lead was short lived as she was tracked down on the 40km bike by the main pack driven by the British trio of Hollie Avil, Helen Jenkins and Kerry Lang. Spirig endured a poor swim and found herself time trialling up the leaders, managing to bridge the gap on lap three of eight. 2004 Olympic champion and local hero, Kate Allen, worked hard to pull herself back into the race and recovered from a ninety second deficit after the swim to work her way up to the thirty athlete strong lead group come second transition.

Moffatt stole an early advantage as she put together a quick change onto the 10km run and took Spirig and 2008 world champion Jenkins with her. The Swiss athlete was the first to feel the burn and slipped back to the chasing pair of Hewitt and Canada’s Kathy Tremblay whilst Allen drew on the home support to work her way through the runners.

At the 5k point Moffatt surged hard to drop Jenkins who then fell back into the clutches of the three strong group behind as the Aussie drew away for the win. Spirig was the first to kick for the line from the chasers and crossed the line five seconds ahead of Hewitt with Tremblay in fourth. Jenkins took fifth as she managed to hold off the fast finishing European under 23 champion Yuliya Sapunova from the Ukraine. Rapturous applause greeted Allen, who was one place back in seventh, as she completed her final race on home soil before she retires at the end of the year.

“I had another good race and I’m really happy with my performance,” said an emotional Moffatt, who dedicated her victory to her grandmother who recently died back in Australia. “I’m enjoying a great year and I hope it will continue through to the Grand Final on the Gold Coast back in Australia in September.”