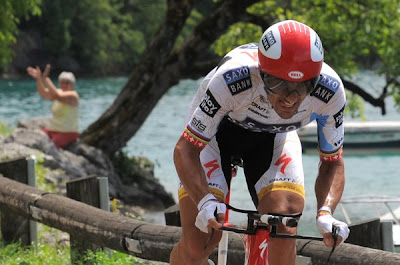 Forty-five minutes after Thursday’s stage, Fabian Cancellara was sitting in the lobby of Hotel Impérial Palace along the shores of Lake Annecy trying to figure out how he lost the 40.5km time trial to Alberto Contador.

The reigning Olympic time trial champion doesn’t lose against the clock very often when he’s on form, and Cancellara said he had a pretty good idea of why he lost.

“(Contador) had two gendarmes motorcycle right in front of him,” Cancellara told VeloNews. “When I saw the time differences to Wiggins, I knew it was going to be close. When you watch, at the front, when you have two (motor) bikes, I don’t say it’s done. When I saw those motorbikes very close while watching on television, then I think, OK, then it’s over.”

Cancellara started 77th at 1:42 p.m. and set the early fast time 48:33, which stood until the very last rider on course – Contador – nipped by just three seconds.

Cancellara shook his head in disbelief as two French police motorcycles drove ahead of Contador through a sea of cheering fans. The big Swiss time trial specialist wasn’t making excuses, but he said the two bikes would provide an advantage that might have tipped the odds in Contador’s favor.

“For sure, I am disappointed. In the end, I said, OK, I will give everything, but to lose something by three seconds,” Cancellara said. “When you watch the race and see that, to lose by such a small margin, that’s why I have something to calm me down. “

To “calm” him down, Cancellara was sipping his first beer of the Tour. He wasn’t exactly drowning his sorrows – that will come in Paris – but at least it was helping to take the edge off of his disappointment.

“You have to smart and strong in a time trial, today there was one smarter than me and he won,” Cancellara said. “He never won a big time trial like that, but today he shows he’s the strongest.”

Cancellara – who won the opening time trial in Monaco and held the yellow jersey for a week -- will now turn to helping his teammates Frank and Andy Schleck finish on the podium in Paris.

Andy is second at 4:11 back and Frank is sixth at 5:59 back, but Cancellara says he believes Frank can bounce back up to third, skipping over Lance Armstrong, Bradley Wiggins and Andreas Kloden.

“I think we can get Frank back on the podium. When we saw Lance and Wiggins today, they had to gain more time today to be close to the podium,” he said. “Frank and Andy will be strong on Ventoux. I think it’s possible the brothers will be on the podium. There it’s all or nothing.”

Cancellara said he was impressed with Armstrong overall.

“I think he went too hard today at the start of the stage. From his comeback to be at this level, it’s impressive. Chapeau for what he did. We know how he trains and how strong he is in the head,” Cancellara said. “Maybe if is one year less out, he could be closer to the podium. He’s going to be with a new team, so watch out.”

Cancellara said once he gets to Paris, he will take a break and race the Vuelta a España to prepare for the world championships in Switzerland in September.

With that, we left Cancellara to finish his beer in peace.
Posted by Recovox at 1:30 PM