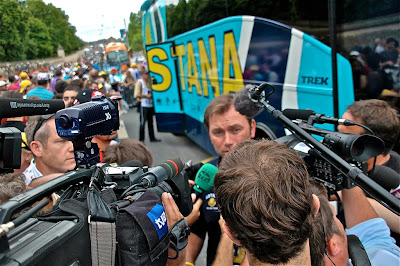 The Astana team, which has so dominated this year's Tour de France, may be continuing into the future, but it may well be doing so without the leadership of manager Johan Bruyneel.

After the Dutch mediator who has been working with the Kazakh cycling federation announced the team's sponsors had intentions of increasing its budget in the future and extending their contract with Lance Armstrong and Alberto Contador, Bruyneel told the Belgian media he was done with the team at the end of the season.

The Astana team has had plenty of troubles with its funding this year, and the team nearly imploded after weeks of non-payment led the riders to strip the logos from their jerseys during the Tour of Italy in May. But the supposed departure of Bruyneel is not just due to the financial problems, but the return of Kazakh star, Alexander Vinokourov.

"We cannot pretend that nothing happened," Bruyneel said to Het Laaste Nieuws. "I feel that the Kazakhs don't appreciate what I did. Secondly, there is the return of Vinokourov.

"I made an appointment with Vino the day before the Tour in Monaco. We would have discussed a possible return, but a day before that meeting he organized a press conference in Monaco, in our own hotel!

"He said there that he will ride with Astana and described his program - without consulting me - and, he says that I have to go if I don't agree.

"One day later the Kazakh Cycling Federation supports Vino and says that they can fire me very easily, that I made mistakes, etc. I don't think they still like me. How can I imagine that I will still be with Astana next year?"

Rumors of a new team being formed by Armstrong have been rife, with the names Trek and Nike being bandied around as sponsors. Armstrong himself hinted on his Twitter on Tuesday that "a very cool announcement" will be made on Thursday regarding "a new American partner for our team in 2010 (and beyond)".

Whether or not the partner will be affiliated with the Astana team or if a new team will be created remains to be seen. Mediator Rini Wagtmans, who worked with the Kazakh federation in negotiations with Bruyneel's management company, said to NRC Handelsblad on Saturday that Vinokourov must remain with the team. However, he also said that there has been an agreement to continue the team with Bruyneel, Contador and Armstrong.

"Vinokourov is to Kazakhstan and Asia what Johan Cruijff is to the Netherlands and Europe. Without their figurehead, the Kazakhs will be discouraged, and the cycling project will no longer be supported by the country," said Wagtmans.

"In Kazakhstan they have only one goal: compete in the 2010 Tour with Contador, Bruyneel and Armstrong."

Regarding the comeback of Vinokourov, he would only say, "Bruyneel and I have agreed that we will announce Vinokourov's future three days after the finish of the Tour."
Posted by Recovox at 9:43 PM