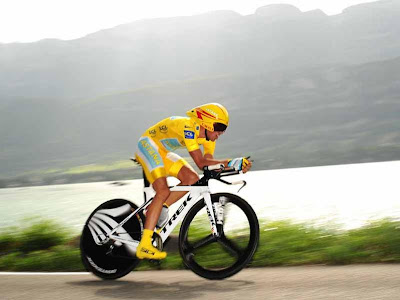 Contador, the 2007 champion who rides for Astana, clocked a time of 48min 30sec to beat Switzerland's Olympic champion in the discipline, Fabian Cancellara, by three seconds.

Seven-time champion Lance Armstrong, also of Astana, finished in 16th place 1:30 adrift of his Spanish teammate, but despite that mediocre result the American moved up one place in the race's general classification to third.

Unless he experiences a sensational collapse on Saturday's 20th stage when the peloton finishes on the summit of the legendary Mont Ventoux, Contador is now virtually assured of winning the race.

Ahead of the 19th stage Friday, which is likely to be dominated by breakaways, the 26-year-old Spaniard has a lead of 4:11 on Luxembourg's Andy Schleck of Saxo Bank while Armstrong is third overall at 5:25. In fourth overall is Britain's Bradley Wiggins, who fought well to move back up towards the podium having dropped from third to sixth after the final day in the Alps on Wednesday.

Having reinforced his grip on the yellow jersey by winning the stage to the race's second summit finish at Verbier in Switzerland on Sunday, Contador's win in the race's other crucial event has cemented his status as the best stage racer in the world.

It was also a bold statement, coming a day after he defied orders from team boss Johan Bruyneel.

Bruyneel told him to allow the Schleck brothers Andy and Frank to go off on their own and to stay behind with teammate Andreas Klöden - a tactic that could have allowed Contador, Armstrong and Klöden to finish the day in first, second and third positions in the overall standings.

"For me to win a time trial at the Tour, it's just huge," said Contador, who admitted he had been primarily aiming to cement his place in the general classification (GC).

"I went out hard but thinking only to protect my place in the GC. But when I got to the first time check and saw my time it gave me a bit more belief. After that I just went as hard as I could to the finish. It was a crucial day for me, and I came through it far better than I expected."

It was a thrilling finale to the penultimate yellow jersey rendezvous of the race after Cancellara had set the fastest time when he started earlier in the day. Saxo Bank's specialist had the race lead for a week after winning the opening stage time trial in Monaco but Cancellara, in the end, had to settle for second place.
Andy Schleck, who is not a time trial specialist, punched above his weight in the race against the clock to finish 21st at 1:45 behind Contador. Given that he was only 15secs behind Armstrong, it was a positive day for the Luxembourger.

While admitting Contador "showed he was the strongest", Schleck warned: "The race is still not over. We'll be doing what we can on the Mont Ventoux."
Posted by Recovox at 9:56 AM