Cavendish: Green jersey has a stain 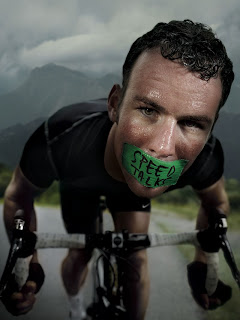 "I spoke to him yesterday and said to him: 'You've won the green jersey now but that's always going to have a stain on it'," Cavendish told BBC5. "For sure I'm upset that the green jersey is not going to be decided on the best man but on a piece of paper, which I don't think is fair.

“I've never sprinted unfairly or dangerously in my career and nobody has ever accused me of it,” he said. “To lose the green jersey like this is a little disappointing.”

Cavendish and Hushovd has been engaged in a point-for-point two man tussle over the jersey in one of the most entertaining aspects of this year’s Tour to date. Cavendish, known for his blunt approach, didn’t mince words when speaking of Hushovd.

"He even admitted yesterday it was a fair sprint: what happened was [there was] a right-hand corner and there's a kink in the barriers and he thinks I've blocked him in but I've held a straight line,” added Cavendish. “Usually you're disqualified if you deviate from the straight line. I held it but the barriers kicked in and he's blocked in and he's kicking and screaming and it causes you problems. But that's bike riding for you. Worse things happen.”

Columbia-HTC’s Cavendish has now changed focused to his second goal of the Tour. Cavendish wants to win the final Tour stage in France’s capital, Paris, on Sunday.

"I said I wanted to get to Paris and that is still the plan," said Cavendish. "Obviously the green jersey is out the window, but now I just want to win on the Champs Elysees."
Posted by Recovox at 11:29 AM