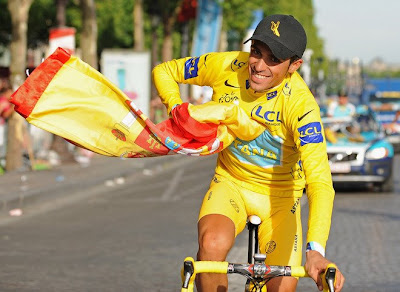 Spaniard Alberto Contador admitted on Sunday that it was tough to win his second Tour de France riding in the same team as Lance Armstrong.

"It was tough to cope with because we both wanted to win the race and that just does not work within the same team," said Contador. "I had prepared for a difficult Tour and it paid off."

Contador won the Tour de France today, as the final stage concluded in Paris. He finished 4:11 ahead of Andy Schleck (Saxo Bank) and 5:24 in front of his Astana teammate Armstrong.

Armstrong had nearly taken the race lead from Fabian Cancellara when Astana won the team time trial on stage four in Montpellier. At that stage the American was 22-hundredths of a second shy of the race leader's yellow jersey.

The two shared the leadership role until the end of the first week. Contador rode clear of his rivals, and Armstrong, on the Arcalís mountaintop finish in Andorra. He gained 21 seconds on the classification favourites, but Armstrong and Astana's director Johan Bruyneel said he disobeyed orders.

Tension built within the team. "Without a doubt, the day after Andorra was the toughest," Contador said.

One week later, on the next mountaintop finish, he established himself as the team's sole leader. Contador attacked with 5.6 kilometres remaining on the Tour's stage to Verbier, Switzerland, to gain 43 seconds and the leader's yellow jersey.

The rivalry between the two former Tour winners started last September when Armstrong announced his comeback to cycling, within the same team as Contador. Armstrong won his seven Tours under the direction of Bruyneel, but after he retired in 2005, Contador came to the team and won the 2007 Tour.

"The preparation for this win was rather tricky, I had elements working against me, but I kept focused," said Contador. "Do I think Bruyneel wanted Armstrong to win the Tour? That is a very good question."

Bruyneel will part ways with Contador and head a new team with Armstrong for 2010. Armstrong announced on Thursday that American company, RadioShack, would sponsor the team for two years.

"One thing is certain. I will be on a different team than Lance Armstrong. I have some different options, maybe there will be a team built around me.

"I had not known Armstrong would come back to cycling. When he came back, I already had a contract in place. It's a pity to part ways now, but maybe in the future we will meet again."

Contador has one more year in his contract with the Kazakh companies that sponsor Astana, but he may seek exit from it in order to join another team. He and Armstrong will likely meet again in next year's Tour de France, but as rivals.