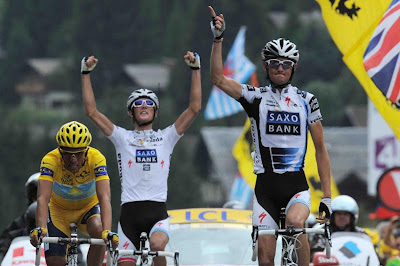 The brothers Schleck of Team Saxo Bank had threatened to take the race apart with measured efforts during yesterday's stage and today that moderation went out the window. With it went the status quo in this year's Tour de France. Having won on the famous slopes of Alpe d'Huez during the 2006 Tour, Fränk Schleck added what was arguably the queen stage of this year's edition to his palmares after a superb effort in the heart of the French Alps.

He won that stage three years ago solo, but today he had the company of brother Andy, his faithful companion and working partner in the day's pivotal moments, and Alberto Contador (Astana), their biggest rival for the overall title, who currently leads the race by a solid margin.

It was a wonderful double act by cycling's most illustrious brothers; Andy handed the win to his brother while Fränk helped his younger sibling to a stunning improvement on the general classification.

"That's not the most important thing," said Andy Schleck in his post-stage television interview. "I'm so happy Frank won the stage. We don't have so many chances on this Tour so we have to take what we can.

"I'm sure Jens [Voigt] saw the stage today - and you get goosebumps. It was just fantastic - everything worked out as we planned it."

The time trial tomorrow will be a difficult day to hold that position, and Schleck acknowledged that it will be every man for himself. "But then we go up Ventoux [on Saturday], and Contador is really strong. We may see the same scenario on Ventoux as today," he said.

The expected war of attrition

The Battle of the Somme was one of the costliest episodes of World War I, defining the term "attrition warfare". Today on the slopes of the Col de Romme, it was the cycling equivalent - the world's best riders throwing everything at each other on a stage that delivered the promised fireworks. The "Battle of the Romme" was expected, and that's what unfolded.

On a day that served up five cols, it wasn't until the final two that the race exploded, but when it blew apart, the effect was enormous.

With Saxo Bank's workhorses throwing everything into an effort leading up to the penultimate climb of the day, the Col de Romme, Andy and Fränk Schleck lined up to make good on their promise of lighting up this year's Tour de France in the challenging Alpine stages. Sticking to their word, the brothers, with a seemingly extra-sensory understanding, attacked just two kilometres into the tough, first-category climb that was being used for the first time in the history of France's iconic event.

Carlos Sastre (Cervelo), former teammate of the Schlecks, tried his luck on the lower slopes where he passed solo escapee Thor Hushovd in the process. Andy and Fränk, with Alberto Contador and Andreas Klöden (Astana) for company, made their move, and it stuck. Behind them the field was decimated with most of the peloton going into survival mode. Damage control was the order of the day.

It quickly became a race of two groups. Fränk and Andy Schleck, Alberto Contador and Andreas Klöden were the leaders who were chased by Lance Armstrong, Vincenzo Nibali, Bradley Wiggins and Christian Vande Velde in the quartet behind. As these two rival gangs made their way up the final climb of the day, the Col de La Colombière, Klöden was shed by an attack from the Spanish race leader while Vande Velde, his work done for teammate Brad Wiggins (Garmin Slipstream), slipped back.

In the downhill run to the finish, Armstrong and Nibali joined Klöden while the leading trio of the brothers Schleck and Contador, "fought" out the finish. In the end it was Fränk who wrote another chapter into the Luxembourger brothers' legacy, while the Spaniard confirmed that he's almost untouchable in this year's Tour.
Posted by Recovox at 10:16 AM