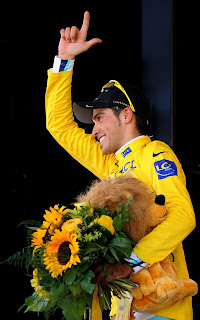 Spain's 2007 champion Alberto Contador of Astana took possession of the Tour de France yellow jersey after a superb solo attack and victory on the 15th stage in the Swiss Alps Sunday.

Contador, winning his first individual stage of this year's race, attacked a small group of favourites containing teammate Lance Armstrong 5.6km from the summit of the 8.8km climb to the summit finish of Verbier.

The Spaniard's move shook up the favourites and yellow jersey rival Andy Schleck was the only rider to try to counter his move.

Schleck, of Saxo Bank, battled hard to catch Contador but could not match the Spaniard's seemingly effortless rhythm. In the end the Luxembourger came over the finish line 43secs behind.

Seven-time champion Armstrong finished 1:35 behind, only a handful of seconds behind two-time race runner-up Cadel Evans of Australia who was at 1:26.

Contador now leads Astana teammate Armstrong by 1:37 in the overall standings, with Briton Bradley Wiggins of Garmin, continuing to impress, in third at 1:46.

German Andreas Klöden, also of Astana, is fourth at 2:17 while Andy Schleck's brother and teammate Frank is fifth at 2:26.

"I'm very happy with this result," said Contador, who since the start of the race has had to endure the extra pressure of Armstrong's presence in the team. "It wasn't a long climb, but we started it really fast and in the end I managed to do what I wanted to make the difference.

"If I wanted to leave my rivals behind me in the standings, that was the only way I could do it."

Armstrong admitted he was "on the limit" as early as the bottom of the climb and from then on had little else to give.

But the American appeared to give his backing to his Spanish teammate.

"I suffered. It was very hard. I was a little bit on the limit at the bottom, I think everybody was a bit on the limit," said Armstrong. "But Alberto showed he is the best rider in the race."

After a week of uninspiring racing the 15th stage finally lived up to its billing as a crucial player in the yellow jersey battle.