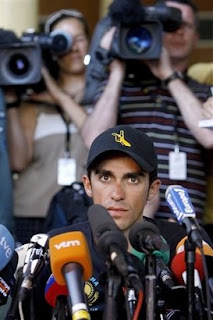 "I have more advantage than I expected"

The Spaniard Alberto Contador assured that his victory on Verbier's summit granted him the indisputable leadership of the team Astana in the Tour and indicated that he achieved the yellow maillot with more advantage than he expected. "With the difference that I gained yesterday I rest more comfortably. It was a key day. I had thought about the differences that we might expect, but they were bigger than I imagined and for that I slept calmer," he commented. The rider from Pinto, who now leads by 1:37 over the American Lance Armstrong, indicated that the advantage in Verbier will allow him "to ride calmer and not be so aggressive as I have been up until now," but he indicated that "with a bigger difference I would sleep even better!"

"If we can take an opportunity to put more distance to the rivals, we will take advantage of it," he assured. Though he designated Andy Schleck as the strongest rival, he indicated that the total of all rivals can put him in trouble if they manage to combine their attacks. "Maybe one that has more freedom can create more problems," he added.

He warned especially of the British rider Bradley Wiggins, a time trial specialist that is doing well in the mountains and is third, at 1:46 from the leader. "I will try to distance him more before Annecy's time trial," he said. Contador assured that all the stages that remain are hard, but that the finish in the Grand-Bornand next Wednesday is the most dangerous. He admitted that he can have a bad day like in París-Nice. "If it happens in the Tour all rivals are going to attack me. It's my task to do everything well to avoid a bad day when rivals are waiting for it to happen," he said.

Contador confirmed that he had the support of the American Lance Armstrong, considered until now his principal rival in the race and indicated that he believes in the professionalism of the rest of the components of the Astana team. "After yesterday's situation and the result of the stage, the situation is more clear and tension is very much a minor thing," said the rider, who indicated that this relaxation will be felt in the team environment and in the race.

Contador admitted that he had come prepared for an internal rivalry with Armstrong and that helped him prepare for the situation. "I knew that it was going to be a difficult Tour on the road and off of it. I had it clear in my mind before coming here and that made it easier to deal with. I expected the tension and psychological pressure," he assured.

Contador admitted to not having a particular feeling about being the first one to defeat Armstrong, winner of seven Tours and assured that, though the Texan was one of his idols, he does not bask in his image. "I was not imagining to ride against him, when he retired I did not expect that he would return. Now, Armstrong is like he is and I am different. My aim for next few years will be to win the Tour as often as I can, but I don't have an objective and I do not know if I will win as many as he did," he said.

Contador sees himself at the head of a new generation of cyclists, which occupied the first positions on Verbier's stage. "Now I am the leader. I am a bit ahead of them, but they are going to be the rivals, beginning at this Tour and also for the future."
Posted by Recovox at 10:44 AM