Alberto Contador "It was a quieter stage than we expected.” 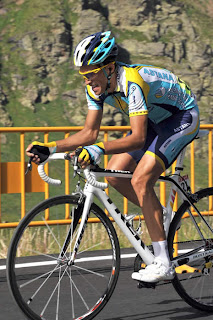 Alberto Contador completed the last stage of the Pyrenees in the same second place on General Classification since there was no significant movement on the Tourmalet, even though it was anticipated that there would be. "It's been a quieter period than expected," said Contador. “There were 70 kilometers from the Tourmalet to the finish and it was necessary to be very brave to try it.”

Though none of the favorite ones moved, Team Astana was vigilant at all times. "There were teams that sent people ahead, but at the end they decided to wait to try another day,” commented Contador. "It was known that the Pyrenees were going to be the easier mountains of this Tour, but there is still a lot of racing to go. Now I plan to rest tomorrow and to go ride quietly for the first five days of next week, thinking about the arrival in Verbier.”

The Tourmalet, where the AG2R set the pace, did not cause much damage, as Alberto acknowledged. "The team of the leader has set the pace and they were interested in making it easy. As everybody decided not to try anything, a big group arrived at the summit together.”

As to his second place in the general classification Alberto is happy for now and not thinking about the yellow. "Leadership is secondary at the moment," he said. "The important thing is to have the yellow on the last day in Paris. At the moment we are more interested in rest and with AG2R as the leaders we can be a little calmer. Although the differences are small, in the end we have to work because our team is more powerful .”

Taking stock of the situation after the first nine stages, Alberto feels things are good for him. "My feelings are very good and today our situation is perfect. We have a super strong team and if we do things well we can keep the race very controlled," he summarized.

Finally, Alberto spoke about the controversy on race communication between directors and riders. He wants to keep radios in the peloton. "I don't want to remove radios because without them a fall or a puncture can cause the strongest of the bunch to lose the race.”
Posted by Recovox at 4:52 PM