Adjusting Your Road Bike For Triathlon 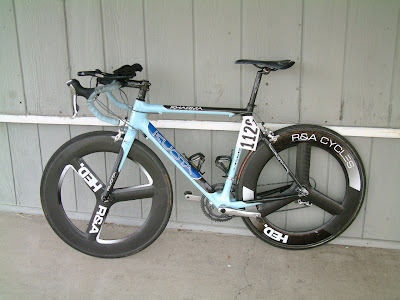 Many riders add clip-on aerobars to their road bikes to make them work better for triathlon. However, clipping aerobars onto your road bike without making other changes in positioning and components is like putting a cook top in your living room and then expecting it to function like it would your kitchen. Additional changes are needed for it to work well. Along with adding aerobars, some other fundamental changes to your riding position and equipment on your road bike can help you achieve your potential.

Positioning: Aerobars alone do not make a bike triathlon-specific; riding position does. Your road bike is not going to be set up well for triathlon until your bike is fit specifically for your needs when riding in the aerobars. Your bike fitter may have done a good job with your road position when you bought your bike, but I’m sure she determined your position to work best without aerobars. Getting refit specifically for an aerobar-based triathlon position by a fitter who is skilled and well-educated in cycling biomechanics for triathlon is where you should start. With proper set-up and a basic understanding of aerobar riding technique, the vast majority of riders should find riding in the aerobars one of their most comfortable hand positions.

Components: Once you have been fit specifically for triathlon cycling, your current road bike can often be converted to your new aerobar position with a few component changes. Common positioning adjustments include the seat coming forward (to maintain an open hip angle in the new lower handlebar position and encourage an easier muscular transition to the run) and the handlebars being set up lower and with a shorter reach (to make sure your body is as skeletally supported as possible in a more aero and forward riding position). Components that often need to be changed on your road bike to allow for such positioning changes include the seat post, aerobars and stem.

Seatposts: Depending on your riding position and the seat tube angle of your road frame, most riders will need a seat post that allows the seat angle on their road bike to come forward two to six degrees. If you need to steepen your road frame just a couple of degrees, a Thompson set-back seatpost used in reverse of its original intent can work quite well. If you need a major change in seat angle, Profile Design’s Fast Forward seatpost, available in alloy and carbon versions, allows more than five degrees of forward angle (thus allowing a road frame with a 73-degree seat tube angle to be capable of at least a 78-degree seat angle). Note that the hardware on the Fast Forward is not compatible with some saddles (many Selle Italia models built in the past five years, for example), so be sure to check for compatibility.

Aerobars: Aerobars all fit differently, and you should understand how any aerobars you consider relate to your riding position and frame geometry before purchasing them. (“Tech Support,” April 2007, covers fit differences between some popular clip-on bars.) Highly adjustable clip-on aerobars, like the Profile CarbonStryke, are often some of the best for adapting a road bike to a triathlon position.

Stem: When selecting a stem, do not sacrifice positioning and safety for aesthetics and weight. Aerobars can put a lot more leverage on the stem clamp than a standard road bar without aerobars, so make sure to use a secure and strong stem. If one is available in an appropriate length and angle, four-bolt stems (like Ritchey’s offerings) are light, strong and secure.

Optional Items: Additional triathlon-specific component changes on your road bike can further enhance speed and performance by allowing you to stay in your aerobars longer and more comfortably. Bar-end shift levers allow you to shift without leaving your aerobars and can be used with flat pursuit bars to reduce weight and aerodynamic drag. A triathlon-specific saddle can address the increase in forward saddle pressure that is common with shifting rider weight forward and lower.

Once changes have been made to the bike, you are ready to start riding in your new position. Remember that anytime you make positioning changes, it is important to allow your muscles a chance to adapt to the demands of a new position, so start slowly and build into the changes.
Posted by Recovox at 11:18 AM