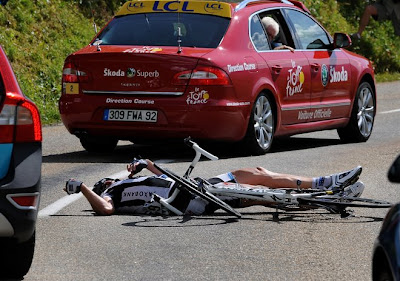 Jens Voigt (Team Saxo Bank) was taken to hospital after his crash in the 16th stage of the Tour de France. While descending the Col du Petit-Saint-Bernard, the German's front wheel slipped away and he went down on his shoulder and head, sliding several metres along the road. The race doctor who attended to him at the scene said that Voigt briefly lost consciousness.

"He is seriously injured, but conscious. He was able to move," said a visibly shaken team manager Bjarne Riis to the German press agency dpa.

A motorcycle carrying a photographer narrowly avoided hitting the fallen 37-year-old. "I saw him laying there with closed eyes and blood on his face," the driver said, adding that he had suspected the worst.

Voigt's fellow German Linus Gerdemann of Team Milram said "When you see a crash like that, nothing else much matters. It gives you goose bumps."

Voigt was part of the race-long break which went clear in the opening kilometres in advance of the Col du Grand-Saint-Bernard. Voigt was dropped on the day's second climb, the Col du Petit-Saint-Bernard, but remained with the yellow jersey group containing the Schleck brothers over its summit before crashing on the descent.
Posted by Recovox at 10:57 AM