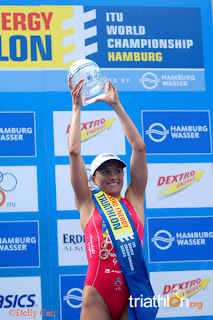 Australia’s Emma Moffatt took her third successive win in the Dextro Energy Triathlon – ITU World Championship Series as she put together a stunning race to cross the line in 1:56:12 in the German city of Hamburg. Moffatt’s win reinforces her lead at the top of the Dextro Energy Triathlon – ITU World Championship Rankings and she will go to the Grand Final on Australia’s Gold Coast as series leader, even if she does not contest the next two races in London and Yokohama. The full race from Hamburg is available to watch on demand at www.triathlon.org/tv

The Beijing Olympic bronze medallist continued her golden year in style as she placed highly in the swim to exit with the chasers behind Hayley Peirsol from the USA. Peirsol, a former swimming world championship medallist dominated the first discipline, carving out a minute lead over the 1500m course in Hamburg’s Alster.

Peirsol tried to make the most of her advantage by riding away from the opposition, but as a storm rolled into the city she crashed on the wet road and found herself back with the chasers. Sweden’s Lisa Norden, a renowned cycle specialist, tried to take full advantage of the anxiety in the lead pack and broke away on the second lap. She was quickly joined by Daniela Ryf from Switzerland and Moffatt, who also seized the initiative as conditions worsened.

By the end of the 40km cycle the leading trio had pulled out a one minute advantage which would prove to be unassailable. Once onto the 10km run Moffatt stormed away from Norden and Ryf, who could not respond to the electric pace, and eventually built a 54 second winning margin. Sweden’s Norden ran strongly to take second place, her second silver medal of the Dextro Energy Triathlon – ITU World Championship Series with reigning under 23 triathlon world champion Ryf a further 33 seconds back in third.

Lauren Groves from Canada was the best of the rest, clocking the second fastest run split to take fourth ahead of the young and aspiring Barbara Riveros Diaz from Chile; a new success story from the ITU Sport Development Programme which offers support and guidance to athletes from smaller federations, of which Lisa Norden was a former beneficiary.

“The weather was a bit dodgy, but I felt good in the swim and although it was cold on the bike all the hard effort of working with Daniela [Ryf] and Lisa [Norden] warmed me up a bit,” said Moffatt. “We got a good break which meant that I could relax on the run and it set the race up nicely. Racing is never easy, especially in the wet, and it can get a bit dangerous, so I’m pleased to come through unscathed. I’m not sure on my racing plans ahead of the Dextro Energy Triathlon – ITU World Championship Grand Final on the Gold Coast, but I intend to get a good block of training done and might consider racing in one of the next races in the series in either London or Yokohama.”

“Daniela and I train together under the same coach and so we planned to breakaway on the bike as we’re both really strong cyclists. But today we were the Schleck brothers and Emma was Contador!” admitted Norden, making reference to the Tour de France. “We were quite surprised to see Emma bridge up to us once we made the break, but it’s testament to her completeness as a great triathlete. I take it as a complement that she felt she couldn’t afford to let us breakaway.”