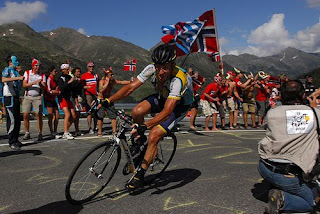 On Sunday, while waiting for the plane transfer to Limoges, he spoke live on French television sports show ‘Stade 2’ in the company of former Tour de France winner Laurent Fignon, who is currently fighting intestinal cancer.

Armstrong confirmed that all the money raised by selling the yellow Livestrong bracelets during this year’s Tour de France will go to fighting cancer in France and encouraged Fignon.

He also answered a series of question about his rivalry with Alberto Contador and revealed that he will ‘probably’ ride another Tour de France in 2010, perhaps with a new Livestrong team.

When it was put to him that there was not yet a war with Contador but that there clearly wasn’t peace, he said.

“The honest truth? There’s a little tension at the dinner table. Alberto is very strong, very ambitious and I understand that, I’ve won this race seven times and I understand he wants to want it a second time.”

“If he wins, he wins. I’ll be second, third or fifth. If he’s the best rider in the race, there’s nothing I can do.”

Armstrong admitted that the victory in this year’s Tour was probably a battle between him and Contador after Astana’s dominant performance in the first week. But he claimed he was not waging a psychological war against his younger Spanish rival. However, he refused to sign for a guaranteed third place in Paris.

“I try to stay relax and try and keep the atmosphere as calm as I can. Not only with Alberto but with the other guys and the staff. We’ll see. The Tour is only 25% done, maybe halfway done, but only 25% in terms of the selection.”

ARMSTRONG STILL IN CHARGE?
Armstrong refuted the idea that he was still the patron of the Tour de France peloton and claimed he had lost count of the number of doping controls he has done after being tested three times between Friday and Saturday.

“I’ve lost count (of how many dope controls). I can’t complain, it’s the nature of the sport we’re in and the nature of sport in general. We need these tests to restore the confidence of people,” he said.

The Astana team is expected to go into meltdown after the Tour de France with Alexandre Vinokourov returning to the Kazakhstan after his two-year ban for blood doping.

Vino believes he will take over the team, perhaps with Contador as leader, while Armstrong and team manager Johan Bruyneel create a new team aimed at promoting Armstrong’s Livestrong cancer foundation.

To help the team get off the ground, Armstrong hinted that he may ride the 2010 Tour de France.

“It’s a idea were working on. Nike is the king of the sports world and so would be a good sponsor. But I’m not sure Nike and Livestrong would be the ideal teaming. We’re looking more into sponsors who are investing in the foundation but it’s harder than the Tour.”
Posted by Recovox at 1:35 PM