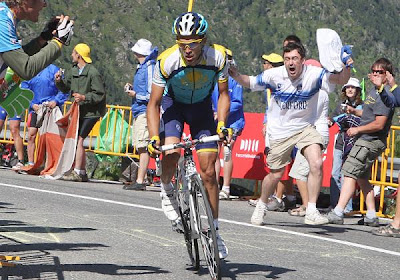 There was a delightful dichotomy to the journey from Barcelona to Andorre Arcalis today; a Tour debutante took the win while one of the race's most spoken-of figures almost finished the day in yellow. His brother tasted success at last year's Tour and today it was time for younger brother Brice Feillu (Agritubel) to do the same, winning on the slopes that led to Andorre Arcalis.

Yes, that oft-discussed character in the Tour de France was Alberto Contador (Astana). While he didn't take the race lead - that honour went to Rinaldo Nocentini - Contador signalled his intent with a fantastic final two kilometres that may decide the leadership of the Astana team for this year's Tour. He now trails the Italian by only six seconds.

As Feillu made his solo dash for a magnificent victory, behind him Astana was keeping the competition in check and ensuring that it cracked yellow jersey at the start of the day, Fabian Cancellara, which effectively put Armstrong in the race lead overall. Passing the flamme rouge, Feillu was blissfully unaware of the battle behind that promised to answer some of the questions thus far in this year's Tour.

Attacks late in the stage from Cadel Evans and Jurgen Van Den Broucke were negated en force by Contador, Armstrong and Klöden before the Spaniard launched his own counter-offensive, a bid for the race lead and a statement to those who thought he wasn't the chosen one in Johan Bruyneel's team. It almost paid off but most observers get the feeling it's a sign of things to come.

A glorious day in the Spanish sun

The Cat 1 Col de Serra Seca saw Riblon take maximum points ahead of Martinez and Kuschynski and as they hit the summit the breakaway riders held a gap in excess of 11 minutes, which grew on the descent. That advantage was consolidated as the riders hit the valley and continued working well together.

Further back in the main field, and with four riders ready to strike a further blow upon the competition, Team Astana cut an impressive swathe through the valley as the peloton approached Andorra La Vella. Upon reaching the city, and with the opening slopes of the day's final climb looming, the break held an advantage of approximately 10 minutes.

The progress of the yellow-and-blue armada was ensuring that the gap was closing, however; just as Columbia-HTC had done in the opening stages in the pursuit of a sprint win for Mark Cavendish, the Astana squad had a four-way wager with Contador, Armstrong, Klöden and Leipheimer forming the favoured quartet. Each appeared expressionless, the formation looking eerily like that of the US Postal/Discovery Channel fleet that dominated the Tour de France for the first half of this decade.

Leipheimer's slight misfortune courtesy of a crash just outside Andorra La Vella assist the breakaway's chances by slowing Astana's progress somewhat. As the roads kicked up, however, the selection's time off the front looked certain to end somewhere on the slopes of Ordino Arcalis. Paulinho, Popovych, Zubeldia, Armstrong, Contador, Klöden and Leipheimer pushed ominously ahead at the front of the peloton, controlling the pace with the escapees well and truly in their sights.

While a seven-minute advantage would normally be sufficient for the break to survive, the speed at which the peloton pushed hard behind surely signaled the death knoll for the brave souls who had risked it all for a shot at victory. This pressure soon became obvious as some of those escapees began to crack. First it was Kuschynski, then as the break laboured and Christophe Riblon attacked, more of the remaining riders were shelled.

While Riblon tried valiantly, the man to make the attack stick was Brice Feillu. He went solo with five kilometres remaining and held onto his advantage, a brilliant, welcomed victory from a name becoming more familiar in the peloton.
Posted by Recovox at 9:16 AM