After a big day on the Tour, Lance Armstrong loosens up 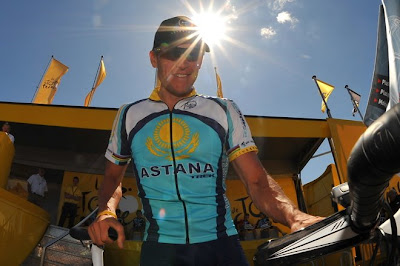 Stage 4 of the Tour de Is He Really Doing This? was at a square here in Montpellier, France, called Comedy Plaza. Which was perfect, since most of the world thought Lance Armstrong's attempt at an eighth Tour de France was a large joke.

They're not laughing now.

By the end of that stage Tuesday, his Astana team had won the time trial and the nearly 38-year-old Armstrong was a butterfly's blink off the yellow jersey.

And we haven't even hit the hills yet.

He was already the oldest winner in 57 years when he claimed his seventh in 2005. Then he took nearly four years off, went through about 17 girlfriends, had a child in June (Max), raised God knows how much hope and money to fight cancer, and then decided, "You know what? I'm not done."

Armstrong is pushing himself so hard on this Tour that if you want to see him, you have to see all of him, butt naked, on the massage table. And so it was to this famous rump I asked: What would be sweeter, the first one, after surviving 14 tumors, or this one?

"This one," he finally said, "because, even to me, it seems impossible. Even in the eyes of the experts, this is absolutely crazy. You can't get away from the facts: I'm an old guy. But, damn, I've worked hard. If I win, I'll have worked harder for this one than any of the other seven."

"I'm an old guy," Armstrong says. "But, damn, I've worked hard. If I win, I'll have worked harder for this one than any of the other seven."

True story: This summer, John Henderson, a writer for The Denver Post, kept asking for time with Armstrong and couldn't get any. Finally, he went to the top of Independence Pass -- the road in Colorado connecting Leadville to Aspen -- and waited. Within an hour, Armstrong rode by. Not a coincidence. Armstrong rode it nearly every day. "Had to," he says now. "Had a lot to make up."

The world is starting to wake up to the fact that the Ancient Pedaler is actually going to be a cog in the Tour de France over the next three weeks. It boggles even Armstrong's mind.

"People didn't expect this," Armstrong says. "They're all like, 'Ah, the guy cheated his way to the top.' But now? Nearly 38 years old? Out of cycling for four years? Tested more than anybody on the planet? Right in it for the yellow jersey? There can't be a shadow of a doubt left now."

But hearts are melting toward the old guy, even French ones. One French reporter stood up Tuesday and said, "Lance, in four days, you have brought more excitement back to the Tour de France than we had in four years here." When the French start admiring Armstrong, you know the worm has turned.

We still have so much to go -- Spain, the mountains, the pitiless Mont Ventoux in the second-to-last stage -- but this could really happen. Lance Armstrong could pull off the greatest American comeback since the fedora.

To be sipping champagne as he steers one-handed down the Champs-Elysees in Paris on July 26, Armstrong will have to do something he's never done before -- attack a guy riding on his bus.

Teammate Alberto Contador, the 26-year-old Spaniard who won in 2007, will be a very steep human hill to climb, especially since he's wearing the same jersey.

On any bike team, there is one star, whom the rest of the team works for -- blocking wind, "pulling" up hills, literally delivering water and food and instruction from the coach. But what if nobody wants to stop being the star?

"Those are the unwritten rules," Armstrong says. "The strongest man wins the event. The other riders work for him. That's what I'd hope he'd do. I know that's what I'll do."

But Armstrong's Spanish isn't good and Contador's English is even worse. They sit at the little table in the Astana bus but they haven't talked about it. Spassky and Fischer never sat around in the green room discussing strategy either.

And if he could top Contador, hold off the other 177 riders, and conquer his own aching body to win a preposterous eighth Tour de France? That's bigger than Jack Nicklaus winning a Masters at 46, because Nicklaus didn't quit the sport for four years. It's bigger than Michael Jordan's second comeback after three seasons away, because Jordan didn't even make it to the playoffs. It's the biggest comeback since, well, since Lance Armstrong coming back from a 40 percent chance to live to win it the first time.

And yet as epic as this could be, it's also been stupidly fun. Armstrong is looser than I've ever seen him at one of these things. He is seeing old friends. "It's kind of like a five-year high school reunion for him," says his agent, Bill Stapleton. Armstrong even drinks a glass of wine with dinner now. Unheard of! What's next? A mint?

The other day, cycling's Dorian Gray was clicked into his pedals, about to get pushed out to the start line, when he launched into Black Sabbath's "Iron Man."