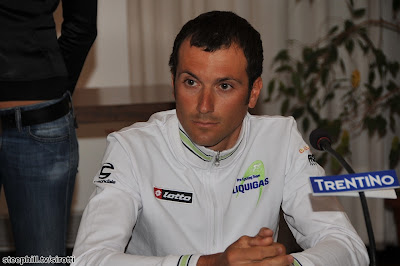 Runner-up Levi Leipheimer, recovering from his crash at the Tour, and third-place Carlos Sastre, exhausted after racing four consecutive grand tours, are both steering clear of the Spanish tour.

That leaves a huge vacuum that several top names will be jostling to fill.

Several major stars have already confirmed they will be at the start-line August 29 in Holland, assuring a heated battle for the GC and in the sprints for the 64th running of the Spanish tour.

And, if rumors are true, Alexander Vinokourov (Astana), who could be back to grand tour racing after serving his two-year racing ban for blood transfusions during the 2007 Tour.

Start lists among the 21 starting teams will continue firm up in the coming weeks as sport directors take stock of who’s up for the task, especially among riders who’ve recently completed the Tour.


The Vuelta is often used as a high-speed training camp for riders looking ahead to success in the world championships and Giro di Lombardia. That’s certainly the case for riders like Boonen, Freire and Ballan.

Andy Schleck, runner-up and white jersey winner at the recent Tour, is among those who have also stated clearly they’re not going to the Vuelta to win.

“I will be at the Vuelta, but not with the intention of trying to win,” Schleck told La Gazzetta dello Sport. “I want to do well at the world championships and Lombardia, and the Vuelta is ideal preparation for that.”

That doesn’t mean that this year’s battle for the GC shouldn’t prove interesting, especially if the unpredictable Vinokourov is back in the mix, because several big names will start with the clear intention of winning.

Among those setting high goals for the Vuelta are: Basso, fifth in his grand tour comeback at the Giro d’Italia in May following his Puerto ban; Gesink, who crashed out of the Tour; Sánchez, who skipped the Tour to focus on trying to win the Vuelta; and Valverde, whose Puerto ban in Italy kept him out of the Tour.

It will also be interesting to see how certain riders step up to the challenge of having a leadership option at the Vuelta. Leipheimer kick-started his career when he rode as a relative unknown to third in the 2001 Vuelta in what was his grand tour debut.

Riders such as Garmin’s Martin, Michael Albasini (Columbia-HTC), Saxo Bank’s Fugslang and FDJeux’s Rémy Di Gregorio could take the ball and run with it, all the way to Madrid, where the Vuelta ends Sept. 20.

The 64th Vuelta starts in Assen, Holland on August 29 with a total of four stages in Holland and Belgium before the entire peloton flies to Tarragona along the Mediterranean Coast to hit Spanish roads.

Two individual time trials, 30km in Valencia in Stage 7, and 26km in Toledo in Stage 20, should help settle the GC in what’s being hailed as a climber’s Vuelta.
Posted by Recovox at 10:24 AM