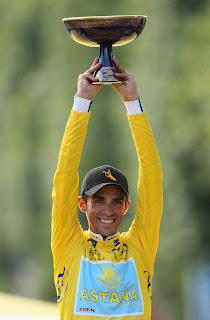 The 2009 Tour de France will be Alberto Contador's fourth consecutive Grand Tour victory and, if you consider each of them, it's also his most important to date.

Each triumph has had been marked by its own distinctive characteristic. In 2007 he won his first Tour de France as the only rider capable of taking the fight to a rampant Michael Rasmussen, who was later ejected from the race. In 2008 he went to the Giro d'Italia with very little notice, gradually riding himself into form and taking a narrow victory that owed huge amounts to stubbornness and determination. Later that year, he started the Vuelta a España as the clear favourite, coping well with that pressure and the call of history. In Spain he had, and took, the chance to beat Bernhard Hinault's record as quickest ever to take all three Grand Tours.

Yet the 2009 Tour will be the best yet, for a number of reasons. Firstly, in winning this year's Tour he will extend his unbeaten streak to four consecutive Grand Tours, and all in the space of two years. Secondly, this victory will come as part of dominant season where he won the Volta ao Algarve in February, took two stages and fourth overall in Paris-Nice in March, and won the Vuelta a Pais Vasco in April. Then, following a break from competition, he came back and finished third in the Dauphiné in June. Nobody can accuse him of focussing only on the Tour de France.

Another distinctive aspect of this Tour has been Contador's ability to overcome the pressure he faced this year, both as race favourite and the tension caused by the close relationship between Lance Armstrong and team manager Johan Bruyneel. Contrary to what the team said, there were subtle signs before and during the Tour that all was not equal; think back to Paris-Nice, and the comments from both after he lost the race lead there, or the sniping and faulting of him during this year's Tour.

Perhaps the most revealing factor of Contador's triumph this year is the manner of his win. From his performances against the clock in Monaco and Annecy to his dominance in the mountains at Andorra Arcalis and Verbier, he gave the impression that if he had to, if he really had to, he could have taken far more time out of his rivals. Contador may look at times like a shy kid, appearing a little lost at the back of the Astana train, but there's a considerable strength of character within the 26-year-old. Otherwise, he simply couldn't have taken on a psychologically-dominating seven-time Tour winner from within his own team and come out on top.

"In 2007, it was very tight until the last time trial," he told the media on Sunday, when asked to compare his two Tour wins. "That was a physical victory. This year, it was necessary to have the legs in the race, but also to be tough mentally. 2007 was physically hard, 2009 was very difficult both physically and mentally.

"Since the beginning of the season, I focussed on every detail. I arrived as the favourite this time and I couldn't count on the element of surprise."

All change at Astana

To understand the situation Contador was in this year, it's necessary to think back 30 months or so. In 2007 the Discovery Channel team was starting the season a little unsure of its prospects. Armstrong had retired in 2005 and while the team head headed to the 2006 Tour determined to do well, the campaign was nothing like previous ones. George Hincapie was spoken of as a possible contender but that didn't work out. In fact, at the end of the three weeks, José Azevedo's distant 19th was the best overall placing.

Enter Contador. He was signed to the team for the start of the 2007 season and immediately started to exceed expectations. Despite being just 24 years of age, he won Paris-Nice, then seized the Tour de France title four months later.

The young Spaniard moved with Johan Bruyneel to the Astana squad, missing the 2008 Tour due to the Kazakh team's exclusion. Absent during July he won both the Giro in May and the Vuelta in September; it made him indisputably cycling's best young talent.

Hence the dissatisfaction when Armstrong said he was going to return to racing with Astana. Contador saw that as a threat to his status as leader and briefly spoke about leaving. He received guarantees that all would be fine, but as things progressed it was clear that tension had started to build.

"When Lance Armstrong announced his return, I still had a contract [until the end of 2010]. I had no other possibilities, and my current team was the strongest for the Grand Tours," he said, explaining why leaving wasn't really an option.

"Circumstances built up against me but rather than worry about them, I used them as an additional stimulus. Lance wanted to do well in the general classification, but competition does not tolerate two winners. I prepared well for the race. I knew I was in good shape. I did not know his state of form, but the true decider is out on the course."

Contador got the upper hand early on when he beat Armstrong by 22 seconds in the prologue, but then he lost 41 seconds to the Texan when he missed an important move in the crosswinds of day three to La Grande Motte. He remained 19 seconds behind until the stage to Andorra Arcalis, where he bolted clear and ended the day two seconds ahead.

Although that move strengthened Astana's hand by moving him closer to the overall lead, it clearly began to pull on the ratchet of tensions within his team. That mountain had shown Armstrong that he had a real fight on his hands; we don't know what the mood was like around the dinner table and in the team bus, but Contador does nominate the following day as being his most difficult psychological moment of the race. "The most complicated time was the day after Andorra," he said, without giving further details.

The next time gain was eight stages later, on the race to the second summit finish of the Tour. Verbier was the location, and 1:35 was the gap back to Armstrong. That increased again by 2:18 on the Le Grand Bornand stage, then Contador took another one minute 29 seconds in the Annecy time trial. The performances dispelled any doubts that he deserved to be the team leader.

"It was a hard Tour," he stated in Saturday's press conference. "Before leaving, I knew I had to be ready both physically and mentally. At the end of each stage, I said 'one day less'. There were tensions, but the situation has normalized. And I am very happy with the result."

In the end, it was not Armstrong but the Schleck brothers who proved to be his biggest rivals. Fränk eventually ended up fifth but he fired some big attacks at the Spaniard in the mountains. His younger brother did this to an even greater extent, marking himself out as one of the top two climbers in the race. Contador was the other.

"Andy really made me suffer a lot," admitted the Spaniard. "He didn't make any mistakes - I made the difference in the time trials, and also in the short time trial in Monaco. He really rode intelligently. I don't think I made any errors and I was very attentive throughout the race. But the Schlecks raced in a matter that was very smart and very brave."

In the end, Contador got the better of both of them, as well as the other general classification contenders in the race. But, given all that took place, given Bruyneel's long history with Armstrong, and given the announcement that he would be working on a new project with the Texan, one question begs asking: did he have the impression that Bruyneel would have preferred Armstrong to win?

"It is a good question," he said, smiling. "In the end, I had what I wanted, and he won with one of his riders. It is necessary to ask him that question."

It's clear that the two riders, who between them have won eleven Grand Tours, are heading in different directions. Otherwise, Alpha-Male-Armageddon would result. Armstrong is bound for the new RadioShack team, while Contador is yet to disclose his plans. One option would be to stay with the Astana setup, which is set to continue next year with the returning Alexandre Vinokourov. Another would be to head to a completely different team.

There has been speculation that he would be welcome at Caisse d'Epargne – who would certainly be looking for a new leader if Alejandro Valverde's CONI ban is extended - while Spanish Formula One driver Fernando Alonso is reportedly interested in establishing a new team around him. Garmin-Slipstream has also been mentioned as a possibility.

Right now, Contador's priority is to get to Paris, then start thinking about what colours he will be wearing next season. "I have to wait until the end of the Tour [before thinking about that]," he said. "One thing is for sure is that I will be on a different project than Lance Armstrong. I have different options, perhaps there will be a team built around me. We will see what's most practical."

Whatever he opts for, it's almost certain that the Contador-Armstrong duel will be re-ignited again in 2010. Armstrong will be approaching 39 years of age then, but the Spaniard seems to think that he will be a big factor in next year's race.

"I think he will certainly be a dangerous rival. He already showed this year that he was a clear candidate, and he will again be a clear candidate for overall victory next year," he stated. "Especially after what he showed in this edition, he could play an important role."

Armstrong won his first Tour at 27 years of age. Contador is a year younger than that and has already clocked up two editions, as well as a Giro and Vuelta victory. Does he think about matching or exceeding the seven-Tour run set by Armstrong?

"I am not really concerned by records," he answered. "I just want to enjoy every year I do as a cyclist and maybe I will focus on other races too. Perhaps I will do the Giro, Classics, the Vuelta. For sure my main goal will remain the Tour de France, without forgetting some other races."

Still, even if he says he does not obsess about winning multiple Tours, he takes some pride in beating a seven-time champion. "When you win a race, it's always better to beat the great riders, the great names," he said. "The photo of the podium in Paris will be historical." 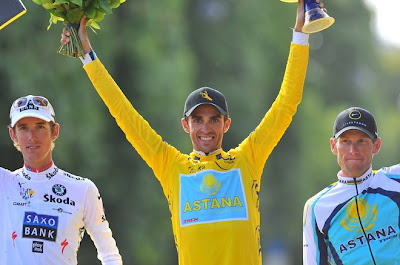