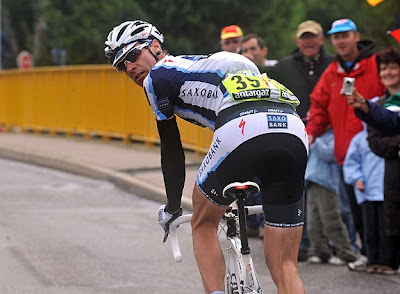 Saxo Bank’s Jens Voigt admitted Saturday he felt like punching someone in anger after a flat tire cost him the chance to stay with a breakaway group on the 14th stage of the Tour de France.

The 37-year-old suffered a back-wheel puncture at the 57km mark and despite receiving a new wheel from the neutral support vehicle; he lost his place in a 13-man escape which included eventual stage winner Sergei Ivanov of Katusha.

The flat-tire cost him 40 seconds with the German insisting he was powerless to close the gap and resigned himself to being caught by the peloton.

"That is the third time I have been in a breakaway which gets close to the finish line without me, so I feel like I want to shoot myself," quipped the German, displaying a dry-sense of humor.

"It was just bad luck, like crashes, you have to have a few per year, but it was just very, very bad timing.

"It's just c'est la vie, like the French people say.

"After fixing the wheel, I calculated my chances of catching alone 12 riders who were going as hard as they could were pretty small.

"There was not much I could do, so I waited for the peloton.

"I was looking around for a victim to punch, I was cooking in my own anger and frustration.

"I was just waiting for someone to make a stupid comment to me so I could release my anger.

"I had a cameraman filming me on the back of a bike, I rode up to him and
said: 'hey, this is a pretty shitty situation, why don't you just leave me alone with my misery?'

"I was close to punching him off his bike … but I didn't, of course."

But the breakaway specialist says his bad luck on this year's Tour is probably balanced by a few years of good fortune in previous years.

"To be fair, I have had many moments of good luck in the past and maybe I have to pay my dues and it will be better next year," said the German.
Posted by Recovox at 4:02 PM