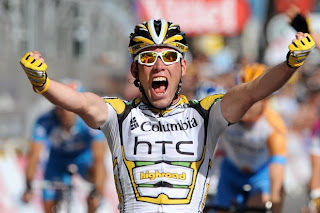 Britain's Mark Cavendish, of the Columbia-HTC team, won the final stage at the Champs Elysées to claim a record-equalling sixth victory in the race. He beat his teammate and leadout man Mark Renshaw, with American Tyler Farrar taking third.

Contador, 26, finished the 96th edition of the world's toughest bike race with a lead of 4min 11sec on Luxembourg's Andy Schleck of Saxo Bank. Seven-time champion Lance Armstrong, Contador's teammate at Astana, was third overall at 5:24.

Schleck, 24, won the race's white jersey for the best placed rider aged 25 and under for the second year in a row.

Armstrong claimed a commendable place on the podium having decided to end a three-and-a-half year retirement when he returned to professional racing in January.

Norwegian Thor Hushovd did enough at the finish to keep the sprinters' green jersey for the points competition while Italian Franco Pellizotti of Liquigas won the polka dot jersey for the race's best climber.