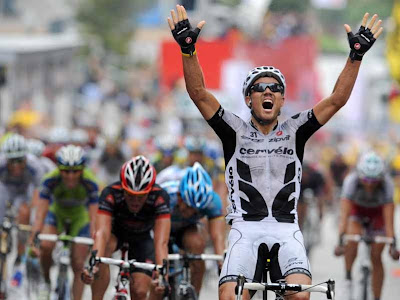 While claps of thunder surrounded Barcelona this afternoon, those in the Catalan capital clapped for the God of Thunder, Thor Hushovd, who prevailed on stage six after a wet and slightly wild day. Cervelo's Norwegian strongman managed to pip Rabobank's fancied sprinter Oscar Freire outside the Olympic Stadium in Spain's beloved city.

David Millar today proved that Mark Cavendish isn't the only British rider to watch at this year's Tour de France, the Garmin-Slipstream rider coming so close to taking line honours, although it wasn't to be. While attention has focused on Cavendish thanks to his explosive displays of sprinting, Millar did it the hard way - a long break - with Quick Step's Sylvain Chavanel and, later, Cofidis rider Stéphane Augé and Basque escape artist Amets Txurruka (Euskaltel-Euskadi).

Six years after his tainted prologue win at the 2003 Tour de France, Millar again looked victory in the face. And again it was snatched from him. WIth 25km remaining he left his breakaway companions to the clutches of the peloton and set off on a solo bid for the win that proven elusive for Garmin-Slipstream thus far in this year's Tour.

Pound, pound, pound went Millar's legs in the lead-in to the final climb... 50, 40, 30 seconds... the peloton pushed to get the lone escapee who was riding the type of race so many dream of - a solo stage win in the Tour de France. Voeckler had lived the dream yesterday, could Britain's elder statesman do it today?

Eight seconds with 1.6km to go... Hope lived. But by the flamme rouge it was all over.

Crashes marred the closing kilometres of racing, with Heinrich Haussler, Michael Rogers and Tyler Farrar going down with about 15km remaining in the stage while Yukiya Arashiro, Laurens Ten Dam and Tom Boonen all felt the wrath of Barcelona's slippery city streets with falls within the final 10 kilometres.

Columbia-HTC threw to its plan B - get Kim Kirchen or Tony Martin to the front and send them on their way - but it was foiled by both Rabobank and Cervelo, the two squads getting their men to the front in the final kilometre, enabling Hushovd and Freire to battle it out. On this day, the God of Thunder reigned.
Posted by Recovox at 9:25 AM