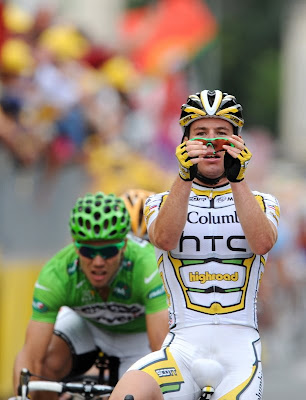 British rider Mark Cavendish won his third stage of this year's Tour de France here on Tuesday when he claimed the 10th stage and his seventh in three starts.

On the first stage in years to be held entirely without the radio earpieces, through which team managers can communicate in their cars to the riders, a four-man group broke away early in the 194.5 km stage between Limoges to Issoudun.

But despite the apparent snail's pace being maintained by the main peloton for much of the race, they were still able to keep the three Frenchmen and one Russian rider in their sights.

Having reached a maximum lead of nearly four minutes, the teams of the sprinters aiming to organise a bunch finish moved to the front to help bring the lead down to 1:32 with 79 km to race.

With only 20km from the finish and with only a 28sec lead the quartet of Benoît Vaugrenard, Samuel Dumoulin, Thierry Hupond and Mikhail Ignatiev were within the peloton's sights.

They put in a final effort over the first 10km of the distance to the finish to push their lead back up to 38sec but with Columbia, Milram, Quick Step and Liquigas taking turns at the front of the chasing bunch it was only a matter of time before they would be reeled in and Cavendish took full advantage of it.
Posted by Recovox at 8:48 AM