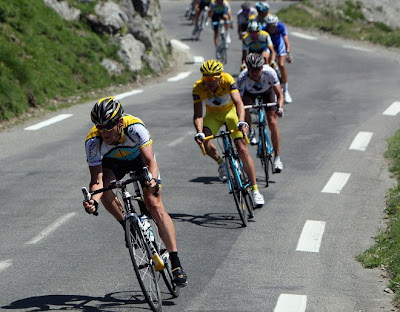 Lance Armstrong believes six days of hard climbing will reveal whether he, or teammate Alberto Contador, will emerge as Astana's real yellow jersey contender in the Tour de France.

Heading into stage 9 Sunday, seven-time champion Armstrong was only two seconds behind 2007 winner Contador in the race's overall classification.

With another two teammates, Levi Leipheimer and Andreas Klöden, in the top ten, Astana will be the team to beat when the race heads towards the Vosges and Alps mountains next week.

While Armstrong was in second overall — only 0.22 seconds away from pulling on the yellow jersey after last Tuesday's fourth stage time trial — Contador has kept his own teammate's plans in check.

As Frenchman Brice Feillu raced to victory at the Arcalis ski station on Friday, Contador provided drama by attacking Armstrong's group to finish 19 seconds ahead of the American and the other GC contenders.

The move put the Spaniard into second place overall, and back into the spotlight.

But on Sunday Armstrong declared that a "very difficult" six days ahead would show who deserved to be given the team's full support.

"We'll have more moments, we'll see who's really the strongest," said Armstrong after explaining why he had not countered Contador's attack.

The American said he felt strong enough to be able to follow the Spaniard near the end of the climb to Arcalis, but he admitted it would not have been right to chase down his own teammate.

"I wouldn't say that I could have easily followed (Contador) because it was an impressive attack, but I probably could have gone. But it wouldn't have been correct for me to go across," added Armstrong.

"I waited for the other guys (rivals), I expected them to pull it back andthey didn't but ... that's life, that's cycling. I had to do the right thing."


After Monday's rest day the race resumes with an undulating 10th stage from Limoges to Issoudun, in which teams and riders will have to race without the advantage of radios.

The second stage to be held without race radios is on the 13th stage, a hilly 200km ride through the Vosges from Vittel to Colmar.

After another two hilly stages, the difficult 159km ride from Martigny, Switzerland to Bourg Saint Maurice on July 21 should provide plenty of drama.

Another huge day of climbing on stage 17 precedes a 40.5km time trial and two days later the penultimate stage features the potential race-decider with the 21.1km climb to the summit of Mont Ventoux.

Armstrong said so far Astana's race had "gone to plan," and that he did not expect much to change in the overall classification until the hilly ride from Pontarlier to Verbier in Switzerland on stage 15.

But he still believes Mont Ventoux could be the decider.

"There's not going to be a lot of change until Verbier," added Armstrong.

"That's where the race is going to be decided. The combination of those days, from Colmar all the way to the top of Mont Ventoux - it's a very difficult six days. We'll wait, the hardest mountain in France (Mont Ventoux) is on the last day basically so you can't forget that."
Posted by Recovox at 9:20 AM