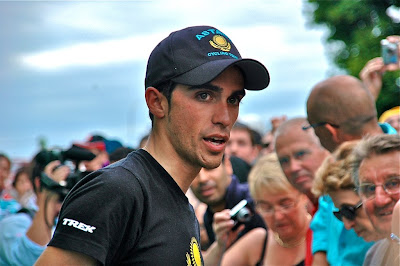 Good evening, everybody – It’s now 20:35, I’ve arrived at the hotel after all the things that go on after the stage!!

Today was a great day, I looked forward to it eagerly because I knew that it was very important for the general classification.
As you’ll know, I’ve won a majority.

The stage ended at Verbier with a summit of 8.5 km, the stage was very fast with a big escape. We always held the gap to 4 minutes, maximum. Later Liquigas also pulled with us, and just when the climb of the last summit was starting, as we had hoped, Saxo went to the front for the Schleck brothers. This last one went very well for me because it was a short climb and you had to start fast to get a gap. After 2 km, we only had a few riders left, and Frank Schleck attacked. I got on his wheel and decided to attack. It was a little farther than I thought (6 km from the finish line), but it went well, and then I just rode it like an uphill time trial.

I’d been feeling very good since the beginning of the stage, and it was the same on the last climb. Now I’m going to rest as much as possible because the hardest week in the Tour is still left. Finally, I’d like to thank you for the many messages of support, they make everything a little easier. Ciao.
Posted by Recovox at 10:50 PM