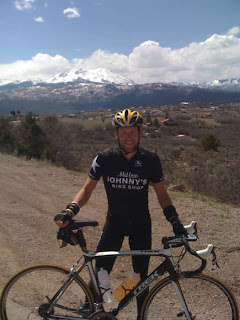 The known contenders for the yellow jersey in 2009 also helped to shift the focus of Lance’s Tour preparation more towards climbing. With Carlos Sastre as the defending champion, Alberto Contador in the race, and Andy Schleck as the undisputed leader of his team (he had been a support rider for Sastre in 2008), it was pretty clear that the racing would be fast and aggressive through the mountains.

Welcome to Aspen
From the beginning of his comeback, I knew that altitude exposures needed to be an integral component of Lance’s training. And the reason that I wanted multiple altitude exposures was so that Lance could acclimate to living and training at elevation, and achieve the altitude-related increase in the body’s ability to deliver oxygen to working muscles. But most important, I wanted him to be able to go back to sea level and take advantage of those physiological adaptations. Within the limited time available between the summer of 2008 and the summer of 2009, I considered multiple exposures to altitude as the best way to accelerate Lance’s progress.

Each time Lance came down from altitude, we were able to increase the intensity of his interval training at sea level. This allowed Lance to train at higher workloads than he would have been able to if he were only training at sea level. But the physiological impact of altitude exposure wears off as your body adapts to being at sea level again, so it was necessary to come down, train hard for 4-6 weeks, and then go back to altitude for 3-5 weeks again.

Fortunately for Lance, he found a high-altitude environment he really loves: Aspen, Colorado. Located at about 9,000 feet above sea level, the elevation is just right for an endurance athlete. It’s high enough that the body clearly recognizes the need to acclimate and increase red blood cell count, but it’s not so high that athletes can’t recover from workouts. Towns that are at higher elevations (there aren’t many, but Leadville, Colorado sits at 10,200 feet) can be problematic because athletes have trouble sleeping and become more difficult to recover from hard training. It also has an airport, which made it convenient for Lance to get back and forth to Austin, Texas and all the other places on his packed travel schedule.

Climbing Workouts
But regaining the climbing strength necessary to ride at the front of the pack in the Pyrenees and Alps during the Tour de France required more than trips back and forth to Aspen. Lance spent a ton of time exploring paved and dirt roads all around Aspen to regain his climbing legs.

His climbing training included good old standards like climbing repeats at or just below his lactate threshold power output, but as he got closer to races like the Tour of California and the Giro d’Italia, it was important to make his training climbs more race-specific. One way we did that was with unpredictable interval times. Since Colorado Springs is only a few hours from Aspen, I was able to spend more time than usual with Lance in early 2009, and on some of those days I’d yell cadences, power outputs, and/or commands to start and stop max-efforts from a follow vehicle. It was as close as we could get to replicating the unpredictable and ever-changing demands of climbing in a real race. When I yelled for Lance to accelerate to his maximum, he didn’t know how long the effort would be or how much recovery he would get after it was over.

Lance continued with this kind of unpredictable interval work during his first European training camp, before Milan-San Remo. He rode well there, and I was impressed with how he performed on the climbs in that race. His crash at the Castilla y Leon race shortly after Milan-San Remo led to some significant changes in his program, but he recovered from his broken collarbone while training again at altitude, and started the Giro d’Italia with decent form.

There was one last altitude exposure following the Tour of Italy, including a modified lactate threshold test. We had Lance and Levi Leipheimer climb a set distance on a climb outside Aspen multiple times, and each run they were to increase their power output by 25 watts. At the stopping point, Lance’s old US Postal Service teammate, Kevin Livingstone used a mobile lactate analyzer to measure the level of lactate in their blood, and I recorded the time for the run, the average cadence, average power, and heart rate at the end of the run. The data showed that Lance had improved his power at lactate threshold 3-4% between the start of the Giro d’Italia and early June. That was the bump in fitness I was looking for out of the Tour of Italy, and Lance stayed at altitude until a week or so before the Tour de France began.

But, you say, Lance wasn’t leading the charge up the mountains, and sometimes he wasn’t even in the group with Contador and Schleck; so the training and the altitude exposures must not have worked. I see it very differently. At the end of the Giro d’Italia, my realistic assessment of Lance’s probably performance at the Tour de France was that he could finish top 10. After we did the lactate testing in Aspen and I saw the progress he was making in the middle of June, I thought that with some luck and good legs in some key places, a top-5 finish at the Tour de France was within reach. And that would have been great, and I would have called it a successful comeback after three years out of the sport.

Well, today was the day that mattered, the day that would really reveal to me whether the hard work Lance did through the winter and spring had adequately prepared him for the Tour de France. He had made it through 19 days of racing, two individual time trials, one team time trial, and two mountain ranges, but the Mont Ventoux would be the final test. I was happy with what I saw today on the Giant of Provence. Lance rode intelligently, and he had both the endurance to handle the length and gradient of the climb, and the snap to respond quickly to accelerations from Andy Schleck. Tomorrow, barring incident or illness, Lance will stand on the podium in Paris.

Lance on the podium at the Tour de France, at nearly 38 years old, and just 12 months after he started training, was beyond my expectations. Then again, it’s not the first time – and surely won’t be the last - that Lance has exceeded expectations.
Posted by Recovox at 9:15 PM