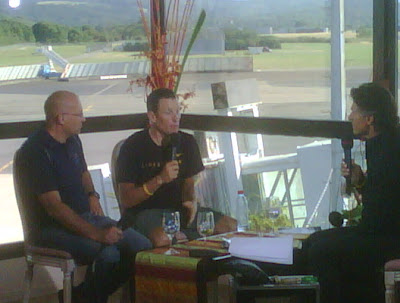 Lance Armstrong conceded on French television Sunday that “there’s a little tension” between himself and Astana teammate Alberto Contador.

The seven-time Tour champion sits in third overall, eight seconds behind Rinaldo Nocentin (Ag2r), who is not considered a yellow jersey contender. Contador, the 2007 champion, is in the runner-up spot at six seconds back.

As their rivals look for ways to close deficits incurred in a thrilling first week, it seems the real battle for supremacy may be taking place in one team.

Last week, Armstrong took advantage of a wind-triggered split on the third stage to distance many of the other favorites, Contador among them, by 41 seconds.

But on the first day in the high mountains on Friday, Contador got his own back.

As Frenchman Brice Feillu raced to victory at Arcalis ski station, Contador attacked out of a group containing Armstrong to finish 19 seconds ahead of the American.

It put the Spaniard into second place overall, and back in the spotlight.

Should Contador gave a repeat performance in the upcoming climbing stages and prove himself the strongest man in the race, Armstrong said, "There's nothing I can do about that. I have to follow the rules.”

In theory, that would mean Armstrong sitting back, as he did at Arcalis — following the wheels and attacking himself only if Astana’s rivals for the yellow jersey try to counter a move by Contador.

In practice, however, Armstrong may yet have ambitions of his own. He told reporters earlier that a "very difficult" six-day spell on the horizon would show who deserved to be given the team's full support.


"We'll have more moments,” he said. “We'll see who's truly the strongest.”

And if he is among those not selected? There’s always next year. Asked on French television whether this would be his last participation at the Tour, Armstrong replied: "Probably not."
Posted by Recovox at 4:45 PM