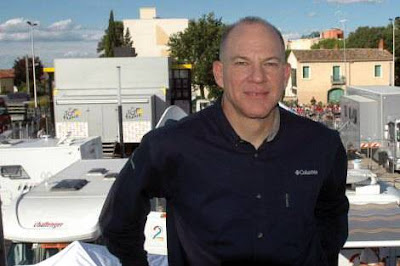 I'm sorry it took so long to return the call on this stage...I know that five minutes I thought it would take to get back to you ended becoming hours after I burned up the rental car. Well, it didn't really burn up, but after I filled the tank with gasoline instead of diesel the motor pretty much flamed out on us.

See, what happened was that everything was closed since it's Bastille Day and the gas pump wouldn't take my American credit card so I had to ask a lady to trade out cash Euros to use her credit card. When she asked me what grade of gas I wanted I thought she knew something about diesel that I didn't ..and then I thought why would she know about that?

It started up fine so Craig and I headed off, but it didn't last long before the motor started stalling out. I kept sloggin' it, but eventually it died. It was a big drag for us, however it was a Renault so it was no great loss to the world at large! It was already dark out and we really didn't have many options so we pulled our bikes out from the back and just rode off to where we were staying. Nothing like a surprise 60k/two hour ride night ride in France with no lights to get to the hotel! I'm sure it will be a big topic tomorrow on the pre-race show because no one will believe how stupid I am.

It's ironic how the peloton can be so predictable at times, but with Craig and I, who knows what will happen. He was a little scared as first, but then it was on and I have to say it's great to travel with someone like him who has so much game. The funny thing about the Tour is that for the riders and all the support crews alike, it's all about conquering distance no matter what the obstacles are.

As for the race today, well it's like when you're looking through a window at people gathered around a table enjoying a feast, it makes you exceptionally hungry. That's how the Brits, American's and Aussies approach this race...like starving peasants looking in from the courtyard while the French riders sit around feasting getting bloated and soft. That's why the French will never do good in this race. I know they've won some stages, but look at the GC results...I can assure you of one thing and that's that there's a not a Frenchman alive that Lance fears for the overall!

It reminds me of a pair of French underwear I bought the other day....

As for Cavendish, I love the way he sprints. He positions himself way over the bars like a wedge. To go up against Cavendish you have to sprint against a vanishing object – there's no draft coming off his wheel. If Cavendish gets a good lead-out he is unbeatable. He may not be able to climb very well, but the last 200 meters of any flat stage are his domain.

If you tried to divide his talent between the physical and mental aspects, I'd say that it's an even 50/50% split. He is the most balanced of any bike racer in France today. As a comparison, I'd say that with Lance it's about 90% talent and 10% metal.

Tomorrow will be an instant replay of today.
Posted by Recovox at 8:12 PM