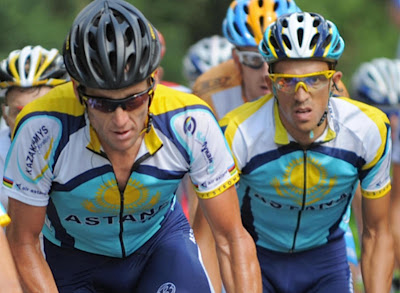 Click on the title link to hear about Lance's view of today's stage.

Armstrong not surprised, however

Though they both race in the colours of Astana, Lance Armstrong and Alberto Contador continue to be more convincing as rivals than teammates.

As he recovered at the summit finish to Friday's seventh stage, Armstrong dropped another hint or 10 that he and Alberto Contador, who attacked his group with 2 kilometres remaining, are racing to different agendas.

Asked if Contador's move had been pre-arranged, Armstrong said, "That wasn't really to the plan, but I didn't expect him to go by the plan, so [it was] no surprise."

Astana was prominent as stage seven saw the Tour enter the mountains, assuming responsibility for chasing down the break, with Armstrong sitting comfortably close to the front, Contador on his wheel. The order from team director Johan Bruyneel, said Armstrong, had been to "chill out a bit, slow down," as they climbed to the finish at Andorre Arcalis, even though Armstrong - or indeed Contador - had a good chance of taking the yellow jersey.

As it turned out, Rinaldo Nocentini (AG2R La Mondiale) claimed the lead by just six seconds, with Contador moving up to second, Armstrong to third, just two more seconds behind his teammate. Missing out on the jersey was no bad thing, suggested Armstrong, since it was "better to preserve the team a little.

"Like I said, I wasn't surprised [by Contador's attack, but] it was windy, so it was hard to be alone in the wind," continued Armstrong.

Armstrong confirmed that he is climbing better than he was at the recent Giro d'Italia. "I have a lot better legs than at the Giro, that was to be expected." But the climb - and the headwind - may have been a factor in keeping the main group largely intact. "It's not a very steep climb, so the speed is high, and there were constant rhythm changes as it changed from headwind to tailwind, headwind to tailwind.

"It's maybe not my speciality, but not bad considering," said Armstrong of the climb. "I didn't expect [to give] a demonstration like some of the other years on the first mountain day. The wind wasn't conducive to that. You saw a big group there [at the finish], but there are plenty of days at the end of this Tour when there are only [going to be] a couple of guys together."

Who the couple of guys might be, he didn't say.
Posted by Recovox at 11:35 AM