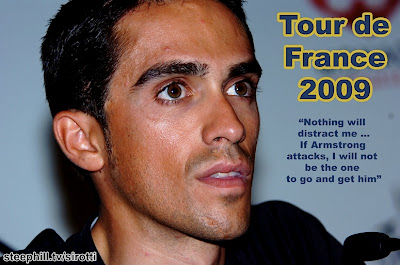 Facing a vast number of journalists and photographers, Alberto Contador earlier today answered questions from the media on the first rest day of the 2009 Tour de France - after eight hard days of racing. Many questions focused on Team Astana's Tour domination and the relationship between Alberto Contador and Lance Armstrong. According to Contador no tension exists. In regards to his Tour domination, Contador concludes that the other favorites will have to attack him, not the other way around.

Lance Armstrong has said that your attack on the Arcalis climb was not part of your team's plan for that stage, but that he expected it. What are your comments in regards to this analysis?

In the morning during the team meeting in the team bus we discussed that we wanted to control the race and hold back, awaiting attacks from our competitors. Those attacks did not happen. I estimated that the situation on the climb was to my advantage and that I was strong enough. I believed that I could use the situation to the advantage of the team. It's one thing to plan a stage during the pre-race team meeting and quite another to face the real race. You can't plan everything. I attacked because I was certain that it would benefit my team.

Some pro cycling analysts find that Armstrong's words after the stage feature a tone of critique towards you. What do you think?

I am very calm because the team benefited from my strong performance.

Do you believe that you are the leader or is the race progressing slightly differently than what was expected?

If I was clearly the leader then the polemic after the Arcalis stage would not have surfaced. Also, I know that we are keeping all our opportunities open and because of it I do not find this topic very interesting or important. It is a topic that some people focus too much on.

How is your relationship after all that has happened?

It is a normal situation and my relation with Lance [Armstrong] is like my relationship with any other rider. We have dinner at the same table and are in the bus at the same time without any problems. Often the tension seems to be bigger on the outside than what it really is on the inside of a team.

Is the situation, however, influencing you?

The situation would be better if there was no need for questions such as these, because this would mean that we were facing a normal situation. It is not like that, but in spite of it I am calm enough. I concentrate on the race and not on those things that could potentially affect my concentration. The Tour de France is a very demanding race and we cannot spend energy on other things.

Does the current polemic inhibit your ability to fight for the overall Tour de France 2009 victory?

The situation might be simpler if I only had to think about how to pedal, but I am doing my absolute best to ensure that these things do not affect my objectives in this Tour. I'm building a mental wall to isolate me from impressions that could have a negative effect on my Tour performance.

Which of the future stages will be good for an attack from Alberto Contador?

In case that we reach the third week of the 2009 Tour de France with you ahead of your competitors in the overall rankings, will your internal and external competitors respect you?

What do you want me to say? We have to wait and see. I think we will do what benefits the team the most and that it will depend on the race situation.

How do you view the last week of the Tour? Which will be more decisive, the Alps, the individual time trial or the Mont Ventoux stage?

In the Alps the general classification will be clarified sufficiently. Even the Colmar stage will show us a lot, but especially in Verbier and then on the Grand Bornand and the Colombiere. And then two key stages will still remain. The Tour is long.

Who is your main competitor when it comes to the fight for the overall Tour de France victory?

The most dangerous ones are the brothers Schleck. I've noticed that Andy is riding well enough and that he is focused on the race. Another one that will for sure be there is Cadel Evans, because in Ordino he was the only one to attack and, certainly, Sastre, because of his great experience. In the Pyrenees he has been at the maximum and, since he is a rider of great resistance, also will also be at his max in the Alps.

How many Astana riders are with you and how many are with Lance Armstrong. Which teams can you count on?

My teammates are very professional and work for all of us. There isn't any type of problem and I trust all of them completely. As for the pack, there are of course always riders who you are closer related to so that they can give me a hand, but the most important thing is that the team is fully with us.

Will you need help to win the 2009 Tour de France or can you win the race alone?

For sure I will need help. You cannot win the Tour alone.

Have you seen any rivals who were stronger than you in this first week?

With the race that we have ridden I have not been able to evaluate the true condition of all my rivals. Though it seems that a lot of Tour has already passed, the overall is still greatly affected by the results of the team time trial and is, therefore, deceitful. So far there have not been any stages that could be used to analyze if there is someone in the peloton who is stronger than I.

Armstrong said yesterday that there was a little tension in the team. Do you feel alone?

I have read his statements, but for me there is no tension at all. I am very relaxed.

Do you feel alone, is your principal opposition inside Team Astana?

I do not feel alone at all, because I have people who support me absolutely around me in this Tour and that continues to be very important. In my team there are riders with many options and skills and who are clear candidates for the GC, but I do not think about it. A lot of the Tour de France 2009 still remains and in any case, it's better that the victory remains within the team than that it goes to another team.

What will be the situation if Lance Armstrong attacks in the mountains. Will you try to catch him or not?

With all these questions, do you feel happy in this Tour?

Yes, it is a happy Tour because my sensations are very good. The Tour is the Tour and the environment is not as bad as others can possibly think. In other races it has been better, but anyway I am very satisfied with this Tour.

Some news has gone out about Fernando Alonso's offer to you to start a new team. What will be your future?

During the next two weeks I will concentrate only on the Tour. Then we'll have to see what happens afterwards, but this is only a rumor. I still have a year of contract left.

In other big tours that you won you were the solo team leader, how do you confront this new situation?

I live it with enough normality, because I knew that this situation was going to arise in spite of what was said ahead of the Tour. When I'm on my bike it does not affect me at all.
Posted by Recovox at 10:15 PM