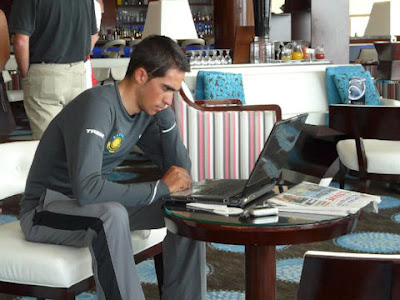 "Before the start I would not have believed I could be in this situation."

Alberto Contador finished Wednesday's stage without problems, with Team Astana working to avoid the risks of the wind, which again provoked splits in the peloton and created moments of big tension. After crossing the finish line, the leader of Team Astana recognized his good position in the overall. "The situation is very good. If they had said to me before the Tour started that I was going to come to Barcelona with the time differences that have been made in the overall, I would not have believed it."

Contador is happy that the Tour goes to Catalunya on Thursday. "I'm certainly happy to go to Spain and to meet my fans. It's always agreeable to return to your country and to meet your relatives, because there will be many people coming to see me."

As for his expectations at tomorrow's stage, he has it clear in his mind. "I especially hope that it goes without incident, because on the following day we have the first stage of the mountains. The arrival in Barcelona, in spite of the kilometres in the city, does not worry me, because it has very broad avenues."

On Friday the race will arrive in Andorra and reach the mountains. "I want to go there because mountains are my territory. My sensations are good but you always like to confirm them."

In answer to those that think his situation with regard to Lance Armstrong resembles the duel between Hinault and Fignon, Contador thinks the opposite. "This is very different," he says. And about the possibility of a victory in Friday's uphill finish in Arcalis, he admits that would be a good place to win, "but at the moment I prefer to think on completing what waits before that and, then, we will see in Andorra."

Finally, Contador answered the question on Armstrong's possible victory in Barcelona. "I do not believe that the finish is demanding enough for that, but certainly it will be necessary to be attentive to the splits that could be made."
Posted by Recovox at 9:55 PM