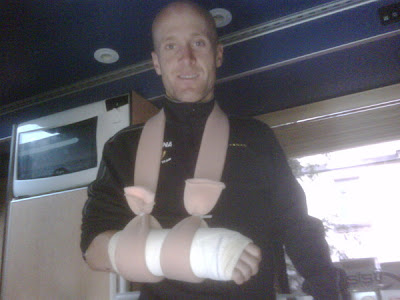 Johan Bruyneel has responded to Levi Leipheimer's departure from the Tour de France, on Friday, with a broken wrist.

Speaking on Friday morning in Vittel, the Astana directeur sportif expressed his disappointment at losing one of the team's key riders.

"He had a bad night so we took him to the hospital, where we saw the fracture this morning," he said. "Obviously it's disappointing and for us it changes a lot. He was fourth on GC and he's one of the guys that could have won the Tour."

Bruyneel said the loss of Leipheimer - who had been 0:39 adrift of Rinaldo Nocentini's (AG2R La Mondiale) yellow jersey lead - would encourage rivals in the race for overall honours to make their move.

"We'd wanted to keep our options open and this morning we lost one of those options. Strategically we are now weaker and it is likely to motivate the other teams to attack us today."

Speaking specifically about Friday's hilly stage 13 from Vittel to Colmar, Bruyneel expects other teams to attempt to take advantage of Leipheimer's absence.

"I don't know if it will determine the outcome of the stage as the climb [of the Col du Firstplan] is a long way from the finish, but it will weaken us as we'll have one less guy. I expect attacks today.

"That's the race, you know, we'll have to deal with the situation," added Bruyneel.
Posted by Recovox at 10:29 AM