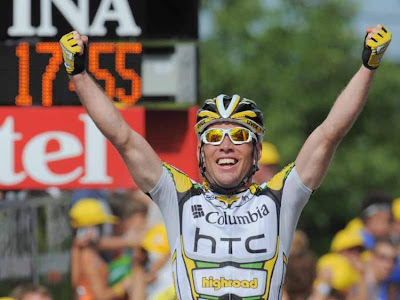 Cavendish dominated American Tyler Farrar in a close-run bunch sprint which saw the 24-year-old Isle of Man rider grab his eighth stage win from only three participations. He thus equals the British record of stage wins on the Tour de France, held until now by Englishman Barry Hoban, who carved out his victories on the race in the 1960s and 70s.

On what was a slightly rolling stage held on tight roads the collective force of the sprinters' teams proved a significant handicap for the stage's breakaway riders.

Pole Marcin Sapa of the Lampre team and Belgian Johan Vansummeren of Silence attacked at the 24km mark. The pair worked constantly to build a lead on the peloton but, lacking the extra leg muscle that more riders would have brought to the table, they were allowed a maximum advantage of only 4min 35sec, at the 41km mark.

From then on the lead dipped steadily and once the teams hoping for the stage to end in a bunch finish moved to the front of the chasing pack their bid to duel for the stage win was virtually over.

With 24km remaining the deficit fell to under a minute and despite Vansummeren, the tallest rider in the Tour peloton, and Sapa resisting the chase the pair were swallowed up with five kilometres to race.

Cavendish's Columbia team played a key role in the pursuit and they soon resumed control at the front in a bid to slowly crank up the pace before delivering the lead sprinter as close to the finish line as possible.

In the finale a few sprinters from other teams, notably the Cervelo team of Thor Hushovd and the Milram team of Gerald Ciolek, tried to disrupt Columbia's train. But in the final two kilometres the American outfit held firm, and on the slight incline leading to the finish Cavendish proved unstoppable once he accelerated and pulled away from Hushovd and his fellow rivals.

Farrar was the only rider to keep pace with Cavendish, who nevertheless won by a bike length.

Hushovd meanwhile had to hand back to Cavendish the green jersey and the Norwegian now has a four-point deficit to the Englishman in the sprinters' points competition.