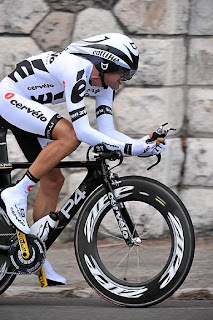 Just a day after publicly apologizing for comments he made about the 2008 Tour de France winner, Lance Armstrong told Carlos Sastre face-to-face he was sorry.

On Wednesday, as Sastre rolled through the peloton during the neutral start congratulating members of the Astana team on their team time trial victory, Armstrong saddled up alongside.

According to Sastre, the seven-time Tour champ told him he was sorry that he said the 2008 Tour was “a joke.”

“He excused himself for those comments and for what he wrote in his book about my victory last year, something that is important for me because in this way he regains the respect that I always had for him,” Sastre said. “I believe it is important that he said it, not only in the media, but also to me personally. I’m happy about that.”

The spat dates back to an interview, recently published in John Wilcockson’s new Armstrong biography, when Armstrong called last year’s Tour “a joke.”

“The (2008) Tour was a bit of a joke this year,” Armstrong told Wilcockson. “I’ve got nothing against Sastre or Christian Vande Velde. Christian’s a nice guy, but finishing fifth in the Tour de France? Come on.”

“As reported in the press, I was disrespectful, to Carlos Sastre, to Christian Vande Velde, to the guys who were a presence in last year’s Tour,” he said. “And that was not correct.”

Armstrong’s gesture will all but erase Sastre’s sense of feeling slighted by the Texan.

Before this Tour started, Sastre was asked what he thought of Armstrong’s comments.

“It’s his point of view, his words, his life. I’m not interested in anything about that. I think he’s a great champion, he won seven Tours, the world championship, he’s a great rider,” Sastre said. “But behind every rider must be a person, and in that respect, maybe he needs to learn something more.”
Posted by Recovox at 11:56 AM