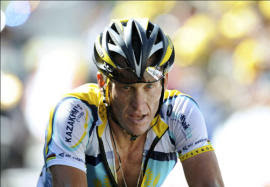 Lance Armstrong virtually accepted defeat in the Tour de France after losing 1-35 to team mate Alberto Contador on the climb to Verbier and struggling to stay with the other overall contenders.

The 37-year-old Texan had hoped to at least hang on to Contador's wheel but did not have the speed on the climb when it really mattered.

It was probably tough for him to admit, but he acknowledged that Contador is now the best Tour de France rider in the world.

“Alberto is the best rider. Sure he is the best climber. You know when everybody is at the limit and you can accelerate again, that's how you win the Tour. I have been there. I definitely suffered, it was very hard, I was at the limit, I no longer have the acceleration and the pace that Alberto has.”

Armstrong said he will ride for Contador and for the good of the Astana team for the rest of the Tour. His objective is now a place on the podium.

“When somebody has so much pressure on him and shows he is the best you can't deny it. It would be unfair. As far as I'm concerned, I'm happy to be his domestique. I'm proud of him. So hats off to Alberto and to the Schlecks for a great race today.

"A day like this really shows who's the best," Armstrong continued. "For me, that's reality but that's not devastating news. As a team, we're strong. There has been a lot of drama about Alberto and especially in the media but at the end of the day we all sit around the table as team mates, and the last thing we can do is to lose the Tour.”

“It's clear we have the strongest rider in the race and this is team sport. None of us, Andreas [Kloden] or myself, can think about ourselves, we have to think about the team. If we play it really, really smart, we can have three guys in the top five and the guy who wins. That's a special opportunity but I think now it's time for me to put my chances aside. I'm now going to do my best and be a solid team mate.”

“I think after today he demonstrated he is the strongest in the race. I thought I'd feel a little better but I didn't. There is no point messing around. I gave everything I had and I wasn't the best.”

“That's because I haven't been there for a long, long time. There might be people out there that expect me to ride like I did in 2004 or 2005 but that's not reality. If I do another year, and I get a season under my belt, maybe I can get that race condition back. But right now, I don't have it.”
Posted by Recovox at 8:08 PM