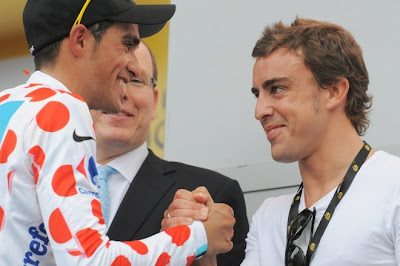 According to a report in the sports daily Marca, Alonso has already discussed the project with Contador. Contador, however, brushed off the story as speculative.

"I only want to focus on the Tour de France, I will talk about my future after that," said the Astana team leader. "This is only a rumor and I have a contract with Astana for another year."

The team could be sponsored by one of the current sponsors of Alonso's Renault team, including Santander, Spain's largest bank and one of Europe's biggest, the newspaper added. The story was published on Monday and did not cite any named sources.

Alonso, the Formula One world champion in 2005 and 2006, was present at the start of the Tour de France on July 4 in Monaco in which Contador is taking part.

Contador is now second overall in the Tour, six seconds behind yellow jersey holder Rinaldo Nocentini of Ag2r following the race's ninth stage on Sunday.
Posted by Recovox at 10:31 AM