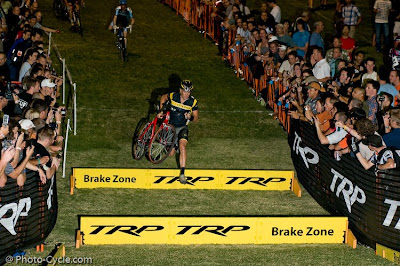 The 2009 edition of CrossVegas is scheduled for Wednesday, September 23 in Las Vegas following the first day of the Interbike trade show, with online registration beginning August 1 at BikeReg.com.

Heading into its third year, CrossVegas has become a fixture on the U.S. cyclocross calendar, attracting almost 10,000 spectators to the stadium setting of Desert Breeze Soccer Complex in Las Vegas. Lance Armstrong raced the 2008 event, attracting record crowds of spectators and media.

Registration is limited for each category to 100 racers and is expected to fill rapidly.

The event offers divisions for Men, Women, Media, Manufacturer, Retailer, Distributor and Advocacy. New this year will be Wheelers & Dealers number pickup at the CrossVegas booth at Interbike on Wednesday allowing racers a chance to avoid the rush at race time. Also, the Wheelers & Dealers start time has been bumped to 7 p.m. to give racers and fans more time to get to the event after the show ends.

In addition to competitor registration, BikeReg.com will offer general admission ticket sales for the event of US$8 per person, to cover the expense of fencing mandated by park authorities.

“We’re victims of our own success,” explained CrossVegas co-promoter Brook Watts. “There have been serious traffic hazards created by fans parking in adjacent businesses and jaywalking major thoroughfares. As a result the fencing was required to mitigate the traffic issues as well as control fans hauling in prohibited beverages.”

Food and beverages sales, including beer, are available at CrossVegas beginning at 6 p.m. In addition, Interbike will again provide a free shuttle bus throughout the night from The Sands Convention Center.

“It’s the best bargain in Vegas,” Watts said. “What else can you do in Las Vegas for eight bucks? If you’ve been to CrossVegas you know what an incredible show it is. If you’ve never been, then you’ve got to come see the biggest race in the U.S.”

For more information, visit www.crossvegas.com.
Posted by Recovox at 10:34 AM