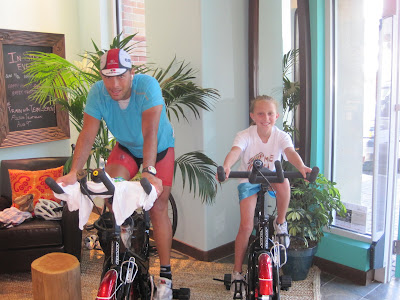 Leave it to lululemon to continually come up with unique ideas to get the community involved in health and fitness! The month of July was dedicated to celebrating the Tour de France at the Walnut Creek store. Community members and staff were invited to log hours on the two spin bikes that live at the store.

Each day people would come in, get a great workout and compete against one another for great prizes. It created quite the buzz in the community and definitely created a great vibe in the store. The overall winner was a staff member named Diane Mateus who pre lululemon had never even been on a spin bike. She was inspired by everyone who was getting involved and ended up logging the most hours. Mateus now has her sights set on completing her first triathlon in September - a goal she set for herself since being employed at the Walnut Creek store.

They also have a August run series which meets every thursday night at 6:00 PM to run the upper ridge trail (Lafayette Reservoir) followed by a BBQ party.

hey - that's me! thanks for mentioning me in your blog! :)