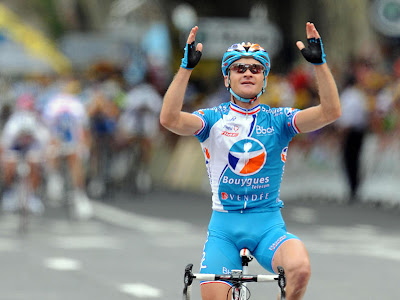 Thomas Voeckler handed France their first victory of this year's Tour de France when he won the fifth stage in Perpignan on Wednesday.

Fabian Cancellara of Switzerland retained the overall leader's yellow jersey, with a 0.22sec lead over American Lance Armstrong ahead of Thursday's sixth stage from Gerona to Barcelona in Spain.

Voeckler was part of a six-man group which broke away from the peloton in the first kilometres of the 196.5km stage from Cap d'Agde and together they worked to build a maximum lead of nearly 10 minutes on the bunch.

The sprinters' teams worked to bring down the gap but in the final 30 km they were up against a strong headwind.

In the closing kilometres Voeckler, who rides for Bbox-Bouygues, launched a decisive attack with 4.8km to go. Despite a counter-attack by Dutchman Albert Timmer, the Skil-Shimano rider left it too late.

Russia Mikhail Ignatiev of Katusha came over the finish line in second place, just ahead of the main peloton containing Saxo Bank's Cancellara and all the main favourites.

Britain's Mark Cavendish won the bunch sprint for the finish behind Voeckler and Ignatiev, just ahead of American Tyler Farrar and Gerald Ciolek.

Nice video. I haven't been able to watch a lot of it. That was a nice move even though the group was within seconds. I am excited for the upcoming hill battles. It will definitely draw out the men from the boys.

Thanks for the information and the video. Voeckler was brilliant. The stage 5 between Le Cap d’Agde to Perpignan had a distance of 196.5 km and 178 riders started the race. He cried as he won. For more details refer http://www.dailysportsnews.org/frenchman-voeckler-wins-stage-with-a-perfect-move/