Tomorrow's The Big One! 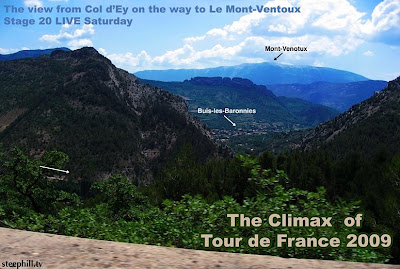 Tomorrow’s the big one then: the stage created by the Tour organisers to bring the 2009 Tour de France to a nail-biting finale – and they seem to have gotten their calculations spot on! At 167-kilometres long, it is one of the shortest stages in the race, but without any doubt or debate, it is the most crucial day of this Tour. Everything that has gone before – the three time trials, the summit finishes at Arcalis and Verbier, the crossing of both the Pyrenees and Alps, as well as the nondescript stages like today’s at Aubenas – each and every one of these can be thrown into the rubbish bin because of the potential to destroy and create huge time gaps on Mont Ventoux, the most feared mountain in Tour folklore. For Astana, more than any team in this race, the Mont Ventoux carries with it an enormous capacity to make or break their dreams of winning the Tour and getting more than one man on the final podium.

That “one more man” is, of course, Lance Armstrong, the sporting legend who dared to come back to the Tour to try to win again, but who has settled so graciously for a supporting role to Alberto Contador, who should not really lose the Tour tomorrow, so superior is his climbing to anyone else. So how can Astana secure a second place on that podium? In their way stand such obstacles as the Saxo Bank team – specifically the marauding Schleck brothers who both want on that podium as well. There’s also the problem of the heat-wave we’re currently experiencing in southern France – can Lance cope with the heat and climb as well as his rivals, anywhere near as well as he used to climb Mont Ventoux? Can Lance keep pace with Frank Schleck and Bradley Wiggins – two men with whom he did battle so bravely on stage 17 – and therefore keep that precious 35-seconds advantage? And, the biggest question of all – if Lance has a really bad time of it - will Astana order Andreas Klöden to leave Lance behind and go for a podium place himself?

No expert in the cycling world can predict what might happen tomorrow, for Mont Ventoux will have its own special influence on the outcome. Expect a big escape group to be away from the opening kilometres, once Astana and Saxo Bank have chased and therefore filtered away the undesirables from the escape. Expect the chase to nullify the escape as the monster ascent begins for real - then close off your brain, for at this point just about anything could happen. If Lance has managed to stay with Contador and Andy Schleck to Chalet Reynard – assuming the other Scheck and Wiggins and a few others have managed to as well – there’s every reason to hope the Texan can cope with the attacks that will come in the final, exposed section of the climb. But we can be sure Saxo Bank will ignite the flame as early as possible to make life uncomfortable for Lance, as well as Wiggins. Just how Contador fits into this makes for interesting debate. He basically has to do nothing more than follow the right wheels, specifically Andy Shleck’s, for by not going off on one of his legendary attacks, he can help the Astana cause to a greater degree. The Tour is Alberto’s for the taking - it’s what happens behind him that will make tomorrow an unforgettable day.
Posted by Recovox at 4:23 PM